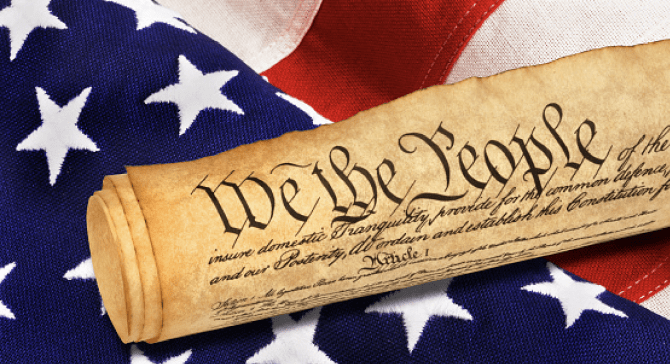 “The Constitution is a work of practical genius. It is morally flawed. The story of the expansion of human freedom is one of shining moral ideals besmirched by the order of ongoing domination. I muck the stalls. I find a diamond. I clean it off and keep it. I do not abandon it because of where I found it. Instead, I own it. Because of its mutability and the changes made from generation to generation, none but the living can own the Constitution. Those who wrote the version ratified centuries ago do not own the version we live by today. We do. It’s ours, an adaptable instrument used to define self-government among free and equal citizens—and to secure our ongoing moral education about that most important human endeavor. We are all responsible for our Constitution, and that fact is empowering.”—Danielle Allen, The Atlantic, The Flawed Genius of the Constitution

Our Constitution established the United States government and determined its relationship with the people and the individual states. Despite its brevity, the Constitution has continued to satisfy the needs of a nation that has grown enormously in territory and population and has seen a vast expansion in both its domestic and international responsibilities. The Constitution not only designed a government but also placed limits on it to prevent arbitrary rule. Particularly through its amendments, the Constitution guarantees every American fundamental rights and protection of life, liberty, and property. But how did we arrive at this ingenious idea?

The first American government established in 1781 under the Articles of Confederation showed signs of weakness and disorder within a few years after it was organized. That first national government depended upon the states for revenue but could not compel their cooperation, so a full constitutional convention was called to address the need for a stronger central government. In May 1787, the Confederation Congress convened in Philadelphia’s Independence Hall, where the Declaration of Independence had been adopted in 1776.

When the delegates convened, Virginia’s Governor Edmund Randolph offered a bold proposal that they not simply revise the Articles of Confederation but create an entirely new form of the national government. Randolph introduced the Virginia Plan, which outlined a Congress with two bodies: a House of Representatives and a Senate. The new government would also have a separate executive branch, headed by a president, who would be both chief executive and commander in chief of the armed forces. The plan also called for an independent judiciary.

The Virginia Plan envisioned a republic based on popular consent. Elected officials would represent the people, although the people could vote directly only for members of the House of Representatives. State legislatures would elect senators. Members of an Electoral College, chosen by the people, would elect the President. The Virginia Plan provided that each state would have representation in the House and Senate that reflected the size of their populations. This was the desire of the larger states, which blamed the Articles of Confederation’s weakness on the equal representation of the states.

The smaller states refused to accept any plan that sacrificed their equality. Roger Sherman of Connecticut proposed to split the difference between the two factions with a larger House of Representatives that reflected the size of each state’s population, while the states would have equal representation in the Senate. This became known as the Connecticut Compromise or the Great Compromise. The delegates accepted the compromise and, as an additional assurance to the smaller states, wrote into the Constitution that no state would lose its equality in the Senate without its consent. Through this compromise, the Constitution went on to create a single nation from a confederation of states, and the states remained permanent and integral parts of the new federal system.

The absence of anyone representing Rhode Island served as a reminder to the other delegates that it would be folly for them to require unanimity in any new form of government. Nor would unanimity be needed for future amendments. Instead, the approval of two-thirds of both houses of Congress and three-quarters of the states would be required to ratify an amendment.

From May until September 1787, the delegates deliberated over all aspects of the new government. They worked out its structure and listed the specific powers of each branch. However, they left considerable flexibility in implementing those powers, by giving Congress the power to make all laws “necessary and proper” for carrying out its explicit powers. The great difficulty in framing a government, as James Madison pointed out in The Federalist, the papers written to support ratification of the Constitution, was first to “enable the government to control the governed; and in the next place, oblige it to control itself.” Assuming that human nature would always be the same and that powerful leaders would inevitably try to amass greater power, the Constitution divided power among the branches of government and created a system of checks and balances. Madison reasoned that “ambition must be made to counteract ambition.”

On September 17, 1787, most of the delegates signed the new Constitution. A few of them, notably Virginia’s George Mason, declined to add their signatures on the grounds that the Constitution lacked a bill of rights that would identify and protect the rights of citizens. Thomas Jefferson, who had drafted the Declaration of Independence, admired the delegates’ work, but he wrote to his friend James Madison that “a bill of rights is what the people are entitled to against every government on earth . . . and what no just government should refuse.”

In addition to the concern about the protection of personal rights, Americans, who had only recently rebelled against a tyrannical government, remained suspicious of a concentration of government power, so the authors of the Constitution needed to explain and defend their handiwork to guarantee ratification. Through a series of essays called the Federalist Papers, James Madison, Alexander Hamilton, and John Jay explained how the new government would work, and sought to calm people’s apprehensions about it. In one such example, Madison discussed the failure of past republics when one faction grew so strong that it dominated and suppressed all others. Madison predicted that the American republic would survive because of its size and its continued growth. In a large republic, no single faction would predominate, he reasoned, thus preventing a powerful majority from suppressing the rights of the minority. As Americans moved westward into new territories, they would form new states that would join the Union and add even more groups into the equation. The arguments put forth by the authors of the Federalist Papers carried great weight, and they still inform us about the thinking of the framers of the Constitution.

On December 7, 1787, Delaware became the first state to ratify the Constitution, and other states quickly followed. To gain requisite support for ratification, Madison pledged that the new government would move speedily to adopt a bill of rights. On June 25, 1788, after four months of debate, the Virginia convention voted 89 to 79 for ratification. Many of the delegates to the Constitutional Convention were ultimately elected as members of the First Congress, including James Madison, who served in the House of Representatives. Representative Madison, true to his word, introduced a bill of rights. The states ratified ten of the proposed twelve amendments that Congress proposed, which became known as the Bill of Rights.

For over two centuries the Constitution has remained in force because its framers successfully separated and balanced governmental powers to safeguard the interests of majority rule and minority rights, of liberty and equality, and of the federal and state governments. More a concise statement of national principles than a detailed plan of governmental operation, the Constitution has evolved to meet the changing needs of a modern society profoundly different from the eighteenth-century world in which its creators lived.

Among the many SLPL databases that educate and entertain customers of all ages about civics, Ben's Guide to the U.S. Government offers some fun resources for our younger audience, parents, and educators... specially designed to celebrate Constitution Day!