Judith Newmark’s The Muny celebrates almost 90 years of Muny history. Now over a century old, The Muny is a multi-generational tradition of Broadway-style entertainment in St. Louis, and Newmark’s book highlights the photography and behind the scenes of Muny productions over the decades. As an introduction to Muny history, it may prompt a closer look at the years you may have missed.

Did you know for example that a number of special stars have graced the Muny stage over the years, like Mickey Rooney, Zero Mostel, Bob Hope, and Debbie Reynolds? The book isn’t all star-studded, however; it has a lot of fascinating behind-the-scenes photography of how musicals are put together from rehearsals to performances, from set construction to the orchestra pit, and the revolving turntable that makes the magic of the Muny’s quick scene changes possible.

In an outdoor venue like The Muny, everything tends to be bigger than expected. For the 100th anniversary of The Muny, the finale of Meet Me in St. Louis featured live fireworks to the astonishment and delight of the audience. In other years, Muny magic has brought surprises like basketball teams and swimming pools, vehicles driven onto the stage -- even helicopters! Perhaps what is most overlooked at The Muny is the sheer size of the seating capacity. With a max audience of 11,000, even a bad night of several thousand attendees dwarfs your standard Broadway venue (which has a minimum of 500 seats). By comparison, the Gershwin Theatre (Broadway’s largest theater) has a capacity of 1933 people. The Fabulous Fox theater, if you were wondering, seats 4500. 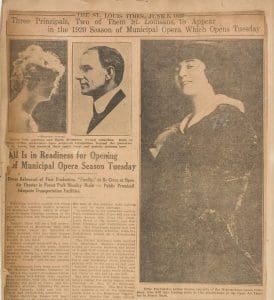 Despite its size, the Muny maintains a sense of intimacy with the high odds that you’ll bump into someone you know, and suddenly, it’s not just a night out, it’s a reunion with song and dance numbers. And what a celebration it is; the Muny’s first season in 1919 had a modest six productions that summer, but by the 1930s, it had doubled to a dozen. The popularity of shows has waxed and waned over the years, but if you can measure popularity by the frequency in years that a show has appeared on the Muny stage, there are some clear favorites. Can you guess them all?

If you thought that Rodgers and Hammerstein would be among the top contenders, you’d be right! Arguably the most popular composer duo of the 20th century, Rodgers and Hammerstein were repeat guests at The Muny in the 1950’s, and some of their well-known hits were amongst the top Muny productions: Oklahoma!, South Pacific, The King and I, and The Sound of Music. Other Muny favorites include The Music Man (Meredith Wilson), Fiddler on the Roof (Bock/Harnick/Stein), and a stage version of The Wizard of Oz, which the Muny first presented in 1942.

Lesser-known to younger audiences, operettas like The New Moon (Romberg/Hammerstein II/Mandel/Schwab) and The Desert Song (Romberg/Hammerstein II/Harbach/Mandel) were early favorites, as was Franz Lehár’s The Merry Widow. The most popular musical however is Show Boat (Kern/Hammerstein II), which graced the Muny stage fifteen separate times. Now in The Muny’s 103rd season, fans were treated this year to a mix of Broadway staples and musical revues including Chicago, On Your Feet, Seven Brides for Seven Brothers, Smokey Joe’s Cafe, and another Rodgers and Hammerstein’s favorite, The Sound of Music. What productions would you like to see in a future Muny lineup?

To revisit past years of The Muny’s history, visit the Special Collections Department of the St. Louis Public Library, or, you can request bound copies of past Muny programs from our stacks. For more information on The Muny’s earliest seasons, check out our St. Louis Municipal Theatre Scrapbooks collection, digitized online.