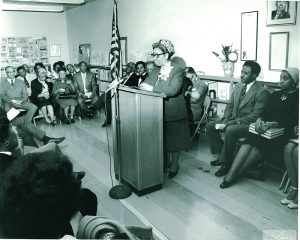 Julia Davis was a prominent figure in the promotion of African American education and history in St. Louis. Born on November 20, 1891, Davis attended Dumas Elementary School, Sumner High School and Stowe Teachers’ College (later Harris-Stowe University). She would go on to teach in the St. Louis Public Schools for more than forty-eight years. During her teaching career, she worked tirelessly to develop a curriculum for teaching African American history. It was through these efforts that she developed a close working relationship with SLPL.

Upon her retirement from teaching, Davis donated $2,500 to the Library in order to fund the Julia Davis Collection on African American History and Culture. This donation would be the equivalent of roughly $15,000 today. In 1973, SLPL celebrated her contributions by naming this location in her honor. In doing so, she became the first living person to have a SLPL location named after them.