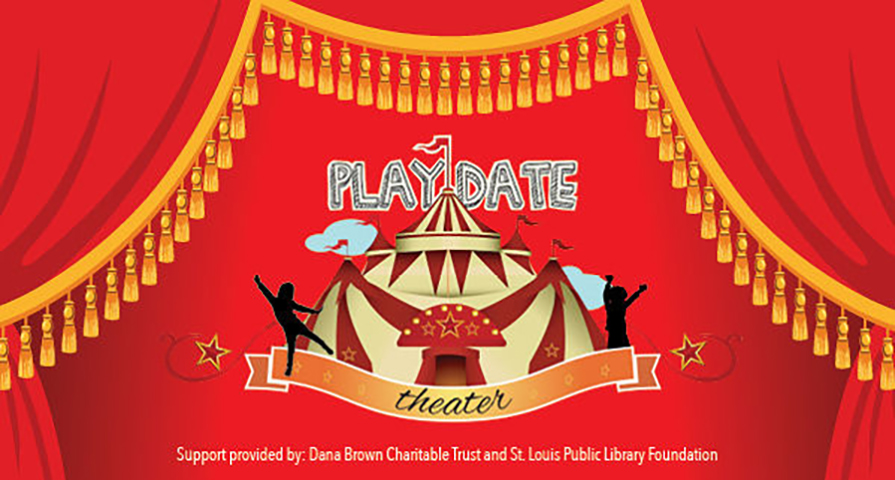 Play Date Theater is held on the Third Saturday of Each Month (except as noted*), from 2-3 p.m. at Central Library’s Auditorium, 1301 Olive Street.

Play Date Theater’s live performances are a great way to introduce children to the art of theater. Shows are entertaining for older kids, but geared toward children preschool through Grade 2.

Kids will learn theater etiquette while being entertained by performers who understand the interests and abilities of young children.

Most shows include audience participation and an opportunity to meet the performers.

February 29 *
The St. Louis Black Repertory Company’s “Anansi the Spider”
Have you heard of the fearless spider they call Anansi? This West African tale is about a cunning spider who uses all of his wit to get what he wants. (ASL interpreter will be present)

March 14*
Hampstead Stage Company’s “Aladdin”
This classic tale is an exotic adventure based on “The Tales of the Arabian Nights.” It is about a poor young boy, Aladdin, who must go out and earn money for his family’s survival. (ASL interpreter will be present)

May 16
Bright Star Touring Theatre’s “The Wizard of Oz”
Follow comic duo Lenny and Mabel down the yellow brick road to the Land of Oz and meet several favorite characters along the way. (ASL interpreter will be present)

June 20
Traveling Lantern Theatre Company’s “Sherlock Holmes Takes the Case”
Something’s amiss, and now “the game’s afoot!” for the brilliant scientist and criminologist, Mr. Sherlock Holmes. Along with his trusted companion, Dr. Watson, Holmes will follow the clues and solve the mystery with the audience’s help. (ASL interpreter will be present)

July 11*
Hampstead Stage Company’s “Alice in Wonderland”
Tumbledown the rabbit hole in Lewis Carroll’s classic tale. Join Alice as she searches for the White Rabbit and tries to find her way out of Wonderland. (ASL interpreter will be present)