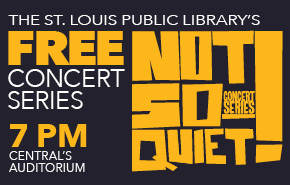 As another great season of the Not So Quiet! Concert Series comes to a close, St. Louis Public Library invites you to celebrate the holiday season with the iconic St. Louis good times and great music legend the Ralph Butler Band on December 15 at 7 p.m. at Central Library’s Auditorium, 1301 Olive Street.

Versatile and perfectly seasoned, Ralph Butler has earned the title of "Public Entertainer Number One," performing thousands of times in St. Louis for audiences of every generation.

This is an all-ages show, first come-first served, no reservation required. Doors to the auditorium open to the public at 6:30 p.m. and the show will begin promptly at 7 p.m.