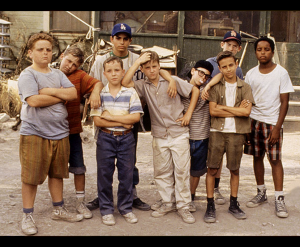 Scab eater! – Butt sniffer!  – Fart smeller! – Slurs thrown until the ultimate insult - You play ball like a giiirrrl! - demands retribution on the ball field. While females everywhere roll their eyes and swear, “You only wish you played ball like a girl,” under their collective breaths, the scene makes even a dead man snort. Can you believe it’s been 25 years since we were introduced to this motley bunch of boys in The Sandlot?! Scotty Smalls takes his mother’s advice to “Climb trees, hop fences, get into trouble!” and gets in with coolest guys in the neighborhood – they’ve got the look, they’ve got the moves, they’ve got the rep – on the sandlot – “a little piece of paradise half a block wide and a whole season long.” The Sandlot is such the epitome of summer and innocence and old-fashioned shenanigans that even the soundtrack reeks of sweaty boys and chlorine and carnival ride-induced puke. 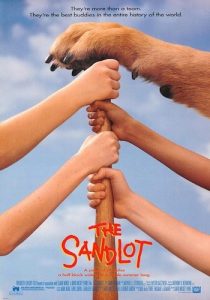 Spoiler alert - actors they are not - but we love these tributes paid to the movie, separately, by the Yankees and the Milwaukee Brewers.  OK, Cardinals – how about stepping up to the plate and knocking one out of the park for the home crowd?

To celebrate the auspicious anniversary of this American classic, we’re highlighting baseball-infused fiction that made it to the big screen. Beyond the glare of Hollywood, there are mounds of baseball fiction collected by Center for the Reader that meld the best of all that America’s favorite pastime entails. Play Ball!! 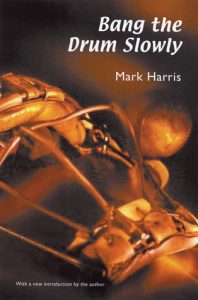 Bang the Drum Slowly: Henry Wiggen, the hero of The Southpaw and the best-known fictional baseball player in America, is back again, throwing a baseball “with his arm and his brain and his memory and his bluff for the sake of his pocket and his family.” More than a novel about baseball, Bang the Drum Slowly is about the friendship and the lives of a group of men as they each learn that a teammate is dying of cancer. Bang the Drum Slowly was chosen as one of the top one hundred sports books of all time by Sports Illustrated and appears on numerous other lists of best baseball fiction. In the introduction to this new Bison Books edition, Mark Harris discusses the making of the classic 1973 film starring Robert DeNiro, based on his screen adaptation of the book. (goodreads.com)

The Fan: Baseball sensation Bobby Rayburn’s major-league career is booming, and he just signed a multimillion-dollar contract with the Sox. Knife salesman Gil Renard’s job is hanging by a thread and he just sold his most prized possession to stay afloat. All that keeps Gil going, in the face of divorce, destitution, and desperation, is rooting for the Sox–and the team’s new savior, Bobby Rayburn. But when his idol sinks into the worst slump of his career, Gil realizes he alone has the power to restore the slugger’s mojo. At the lowest point he has ever known, Gil finds his mission in life–a mission he will carry out no matter what it takes or who gets hurt. (goodreads.com)

For the Love of the Game: Billy Chapel is a shoo-in for the Hall of Fame, but now, in the last days of his seventeenth major league baseball season, he toils for a losing team. In short order, he finds he's been traded, his lover leaves him to marry another man, and he pitches a perfect game. This novel may sound like Rocky in Cleats, but it's more than that. It's about commitment, love, maturation, and decision making. Shaara, winner of a Pulitzer Prize in 1974, has a gift for subtle characterization, especially in his portrait of Billy, perhaps the most memorable character in recent baseball fiction. Billy's struggle to avoid becoming just another typical ex-ballplayer is sensitively depicted. Highly recommended. (Booklist)

The Natural: Bernard Malamud's first novel, published in 1952, is also the first, and some would say still the best, novel ever written about baseball. Malamud tackles the story of a superbly gifted "natural" at play in the fields of the old daylight baseball era, and invested it with the hardscrabble poetry, at once grand and altogether believable, that runs through all his best work. Four decades later, Alfred Kazin's comment still holds true: "Malamud has done something which, now that he has done it!, looks as if we have been waiting for it all our lives. He has really raised the whole passion and craziness and fanaticism of baseball as a popular spectacle to its ordained place in mythology." (goodreads.com)

Shoeless Joe: “If you build it, he will come.” Known popularly from the movie, Field of Dreams, these mysterious words inspire Ray Kinsella to create a cornfield baseball diamond in honor of his hero, Shoeless Joe Jackson. What follows is a rich, nostalgic look at one of our most cherished national pastimes and a remarkable story about fathers and sons, love and family, and the inimitable joy of finding your way home. (goodreads.com)