These days it seems like every other bestseller is about a "girl" who, let's face it, is pretty reliably actually a woman. Emily St. John Mandel, author of the 2014 sensation Station Eleven (and not ONE book with "girl" in the title!), is not the first to notice, but she did write this great piece in FiveThirtyEight on the issue. And it seems we're reaching almost 1% "girl" saturation!! See for yourself: 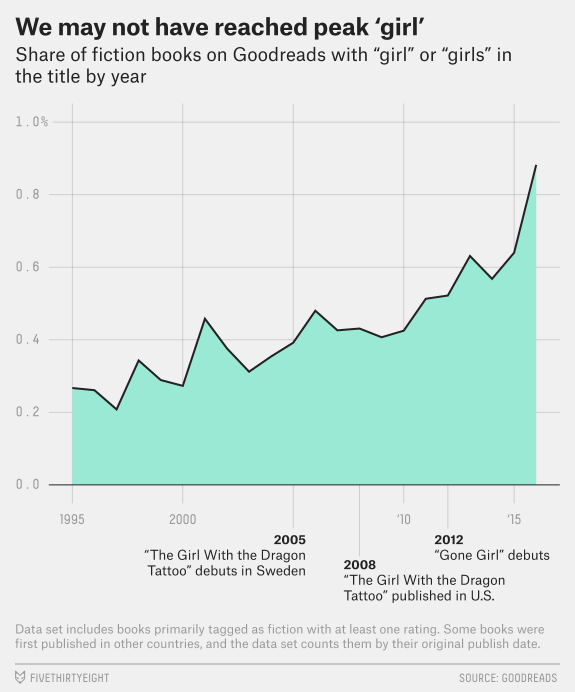 Because there is a certain element of mystery to the whole thing, when a book does explode, there’s a natural tendency to try to copy elements of its success. “It always seems that when there is a mega-sales hit in publishing,” said a New York City literary agent who asked for anonymity to speak candidly, “everyone scrambles to ride the coattails of that success. Even after all these years in the business, I continue to be surprised at just how long and how widely publishers will persist in those attempts. I guess it’s hard to blame them.”

A small smattering of the "girl"s Mandel mentions, available at SLPL:

The Girl on the Train

The Girl With the Dragon Tattoo

The Girl in the Spider's Web

The Girl Who Fell From the Sky

Publishers tend to credit Stieg Larsson's series with the rise in like titles, but Mandel sees evidence of an increase before 2005's The Girl with the Dragon Tattoo. Look at the graph above again, and you'll notice a spike just after the year 2000.

But this trend may not be so innocuous as all of this. In light of last week's election, "There are, of course, circumstances in which 'girl' seems plainly derogatory (e.g., calling Hillary Clinton a girl) or plainly risible (e.g., Hillary calling herself one)," says Robin Wasserman in an article for LitHub. "A thoroughly unscientific survey of my woman card-carrying friends suggests that they find the term acceptable—if not always accurate—when they apply it to themselves, but intolerable coming from a man." Mandel offers another graph in illustration: 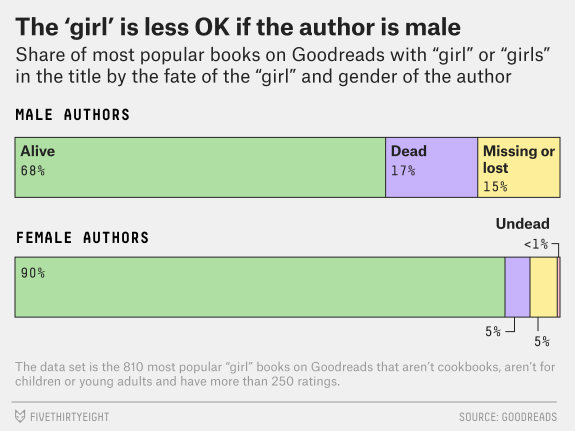 Notably, 79% of the "girl" titles Mandel tallies are written by women. But that's just the point—when will our women-centered fiction graduate girlhood, women-written fiction especially? Where's the end to the infantilization?

(Are The Woman in Cabin 10 and Woman of God perhaps encouraging harbingers of the trend's death? Here's hoping.)