I remember growing up and smelling the wonderful scent of freshly baked bread. We lived in a rural area, so it was not as if there was a grocery store a few minutes away to run out and buy a loaf of bread. Instead, we had a fifty pound bag of flour in our basement pantry, ready to be used for baking bread. And my mother did just that, baked bread at a moments notice. And we all loved it!

Although we more than often had sourdough bread, or freshly made pizza, we also had whole wheat flour bread to eat. There are two classifications of commercial wheat that you can buy: hard and soft. When bread that has a higher protein content, the harder the wheat. Then, within these two classifications there are two subcategories: winter wheat and spring wheat. These depend upon their growing season.  Finally, within these two subcategories there are three more divisions of wheat: red, white, and durum. 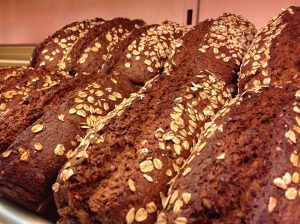 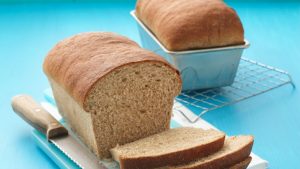 You will discover that you can use white flour while baking with wheat flour. To make a lighter bread try using 2 cups of white flour to 1 cup of whole grain flour. For a denser, chewier bread, use 100% whole wheat flour. Note that with a higher proportion of whole grain, the dough will take longer to rise. Temperature can make a difference on how quickly your bread will rise. The same goes with the elevation you live at. Different elevations will have different baking times. What ever you decide to do,  you will enjoy freshly baked bread and be glad you did!