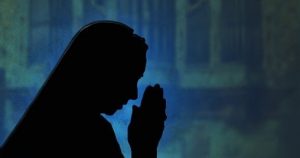 St. Louis Public Library is hosting an exhibit entitled "Catholic Sisters: The Spirit of St. Louis", which celebrates 200 years of Catholic Sister ministry in St. Louis. As a collective of highly-degreed and benevolent women, the Sisters have had a substantial impact on the city in terms of the founding and management of educational and healthcare institutions and systems that thrive to this day. Center for the Reader hopes the Sisters are similarly good humored as we roast the bicentennial of the dedicated emancipated of St. Louis!

Although there are reformed or recovering Roman Catholics among us at Center for the Reader, we were clearly not paying attention during CCD because, until recently, we weren’t aware of the distinction between a Catholic nun and sister.  A woman who lives a contemplative life usually in a cloistered or semi-cloistered monastery is a nun; her ministry and prayer life are centered within and around the monastery. A Catholic sister, on the other hand, lives, ministers, and prays within the world, engaging in works of mercy that take her ministry to others where they are. Whether using the term nun or sister, what does it say about our religious upbringing if these are the images that come to mind? 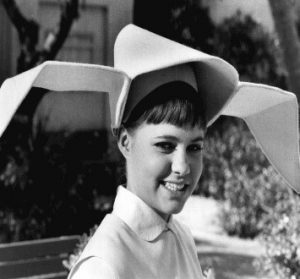 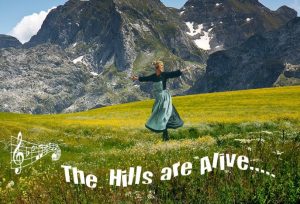 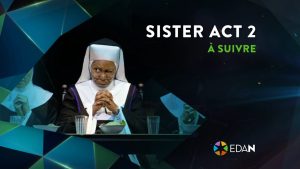 Like so many representations of devout characters, Hollywood exaggerates its generally inaccurate portrayal of women religious. The entertainment industry seems to alternately demonize nuns as mean tyrants who wield rulers against wayward parochial school students, trivialize them as giggling gaggles of simpletons or headstrong troublemakers that need to be controlled, or patronize them as theologically naïve or repressed and sexually conflicted women. Literature may likewise type-cast these devout women, but we have unearthed a trove of fiction starring the Sisters in some pretty bad-ass roles. In addition to these series, we recommend checking out the nun-merous titles we have collected for you at Center for the Reader.

Sister Mary Teresa series by Monica Quill: The best attribute of this series is the nun-sensical puns for titles (Let Us Prey, And Then There was Nun, Nun of the Above, Nun Plussed). The elderly, eccentric, shrewd, if distinctly pudgy, Sister Mary Teresa is the Superior of the three nuns remaining of the Order of Martha and Mary featured in this ten book series. The formidable Sister Mary Teresa (known as Attila the Nun behind her back) meddles in police affairs from home, bidding others to run around, until she gathers all suspects together to reveal the guilty party. Self-considered ‘the last of a breed’ of traditional nuns, suspects and innocents alike must be wary of her formidable scrutiny and handy old Luger pistol – she’s a true holy terror!

Sister Eve / Divine Private Detective Agency series by Lynne Hinton: Sister Evangeline “Eve” Divine, a Benedictine nun for the last twenty years, is in the throes of a crisis in faith and contemplating her future as a nun. Sister Eve had hoped that ‘being a monastic would help with her weakness, tame her temper, and keep her willful spirit at bay' in attempts to avoid being like her father. Although she has devoted her life to the church, she is far from being a conventionally submissive nun, as evidenced by her penchant for Harleys and stray animals. During prolonged leaves of absence intended to contemplate her future, Sister Eve, given her notorious ‘nose for crime,’ is compelled into helping her father investigate cases through his detective agency… which direction does her future lie?

Sister Pelagia by B. Akunin: As a literature and gymnastics teacher for a diocesan school for girls in a small Russian town, Sister Pelagia is far too ‘lively, fidgety, curious and undignified in her movements’ to be a nun in the late 19th century; in fact, Bishop Metrofani refers to her as a ‘walking disaster with freckles.’ Although the Bishop has a reputation of solving mysteries, especially those of a ‘criminal complexion,’ the secret to his success is the novice Pelagia, whose powers of observation and quick intelligence make her a force to be reckoned with, nearly as much as the knitting needles with which she defends herself.

Sister Frevisse by Margaret Frazer: During the mid-1400s, Sister Frevisse, a Benedictine nun who runs a small priory like a militant hotelier governing guests, is skilled at seeing beyond the obvious to solve mysteries that befall the priory. Gifted with a dry intellect, the impatient Sister Frevisse tolerates no fool; when told that demons had been spotted, for example, she retorted, “I doubt it. There was distinctly no smell of brimstone in the room.”

Sister Mary Helen by Carol Anne O’Marie: Retired after 50 years as a nun, Sister Mary Helen, deemed by others to be a cross between Joan of Arc and Miss Marple, is a humorous, redoubtable, avid reader of mystery novels that she hides in prayer book plastic covers. She is reinventing herself as a history professor in San Francisco but keeps finding herself in situations more appropriate to her favorite detectives; she can quote Perry Mason and Charlie Chan with the best of them. Not one to hesitant to complain to God, the congenial Sister Mary Helen gets so close to danger that she’s not afraid of dying, because quite frankly, God owes her a few explanations. Quite a plucky one, this nun!

Sister Fidelma by Peter Tremayne: Set in mid-7th century Ireland, against a backdrop of the historically accurate melding of old Celtic Christian, incoming Roman Catholic, and pagan beliefs, these novels are as much history lessons as murder mysteries. Sister Fidelma experiences all manner of dramatic and often violent adventures while living in a conhospitae, a mixed sex monastery, at a time when monks and nuns were allowed to marry and have children. A strong-opinioned feminist, Sister Fidelma enjoys genuine respect, power, and equality, or maybe it’s simply due to being sister to the king!