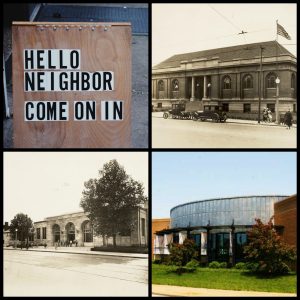 Welcome to the first post from the Carpenter Region blog!

Our region includes the three locations of Carpenter, Barr and Kingshighway libraries and we serve the neighborhoods of Tower Grove South, Tower Grove East, Benton Park West, Fox Park, McKinley Heights, Lafayette Square, Shaw, The Hill, and Southwest Garden (to name a few).  Our locations are as diverse as our communities, and this blog will feature content about our programs, displays, services, and much more.

Barr was the first of seven library branches that were supported by Andrew Carnegie in the City of St. Louis. Formerly the site of the Mount Calvary Episcopal Church (which was destroyed in the 1896 tornado), this location opened on September 17, 1906. Designed by Theodore C. Link, the architect of Union Station, this location was furnished with the circulation desk and books from the Model Library in the Missouri State Building at the 1904 World's Fair. In April, 1995, this location closed and underwent a significant renovation, preserving the façade and architectural details but updating the interior space. At that time, the Library also commissioned Robert Cassilly to sculpt figures from the fable of "The Tortoise and the Hare," which greet visitors in the courtyard entrance on the west side of the building. You may also see a Cassilly sculpture of a lion at the front entrance.

Kingshighway originally opened in November of 1962 in a rented store building.  Remodeled in April of 1973, Kingshighway has always had a very unique architectural style. The 1973 design was very modern for the time, boasting large concrete shapes and strong profile. The all-white building was highlighted by green paint, which showed off the lines of the building. The building underwent a full renovation in 2000, reopening in 2001 with a distinct round structure at the front, filled with picture windows that allow for an generous amount of natural light. Inside, visitors can look up in the center of the building to read 33 different passages from a full range of authors.

Carpenter opened in February, 1927 in its current location of 3309 South Grand. According to Library records, when this building opened, the crowds were so large that for 10 days, policemen were needed to handle the influx of people.  Named for St. Louis Public Library Board President George O. Carpenter, who donated the land for the building, this library was the seventh of the Carnegie branches in St. Louis. It was also one of the last Carnegie libraries built in the United States. Architect William T. Trueblood  drew inspiration from Florence’s Loggia dei Lanzi when designing the building. While Carpenter has undergone several renovations since, including one from 2000-2002 which almost doubled the floor space of the building, the original character of Trueblood’s design remains. The original structures are toward the north, closer to Utah Place, with the addition on the end closer to McDonald Avenue.

We invite you to visit our locations, browse our collections, and meet our friendly staff!