This Ancestry Library Edition (Ancestry LE) database contains U.S. Navy muster rolls and associated reports of changes for U.S. Navy enlisted personnel who served on U.S. Navy ships or in other naval activities between 31 January 1938 and 31 December 1949. Over 33 million records are contained in this database.

The image below shows a muster roll for the U.S.S. Indianapolis, the Navy ship that delivered parts for the Hiroshima bomb to the island of Tinian in the South Pacific. While making its way from Tinian to the Philippines, the Indianapolis was hit by two torpedoes and sank in less than 15 minutes. 300 men went down with the ship, while the remaining crew members had to abandon ship, most without lifeboats or flotation devices. 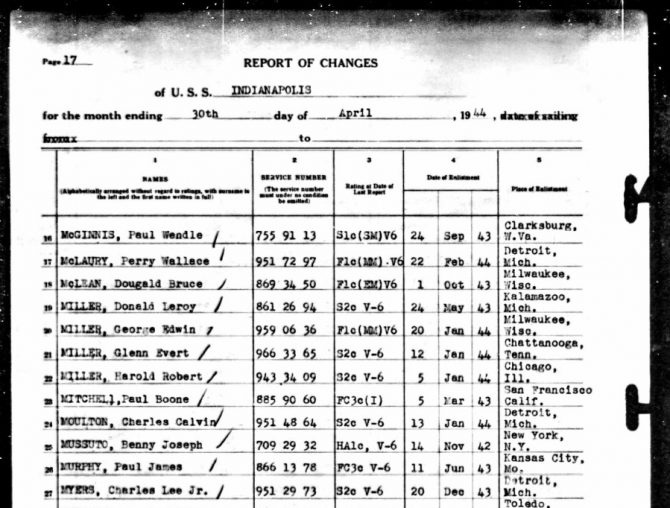 The Indianapolis had been traveling unaccompanied and under strict radio silence, so the Navy was unaware that it had been torpedoed until survivors were spotted by a patrol plane 3 ½ days later. 317 sailors were eventually saved, while 579 men died due to hypothermia, dehydration, salt poisoning, or drowning. Sharks fed on dead sailors, and in some cases attacked living sailors—generally isolated ones who had drifted away from groups.

During our Navy Art Exhibit in 2001, SLPL played host to Paul Murphy, an Indianapolis survivor from Colorado. Mr. Murphy gave a talk on his experiences, answered questions, and signed autographs for audience members. We were grateful for the opportunity to host a hero and keep the memory of a pivotal event of World War II in the public eye (Mr. Murphy died in 2016 at the age of 91).

Late last week, a research vessel located the wreckage of the Indianapolis nearly 3 miles beneath the surface of the North Pacific Ocean. According to U.S. maritime law, the wreck is both the property of the Navy and a military grave not to be disturbed by salvage operations. The Navy has restricted access to the exact location of the wreckage.

There is a list of reference databases that SLPL subscribes to here.

Many of these databases can be used from home by persons with a valid SLPL library card, although Ancestry LE must be used at Central Library or one of our branches.