In the bad old days when the Internet consisted of a few dozen computers each of which was as big as a long-haul truck, we librarians depended in large part on printed state adjutant general reports for information about men who served in America’s 18th and 19th century wars. While SLPL owns a very good collection of these printed reports, our coverage does not include every state or every 18th and 19th century war. 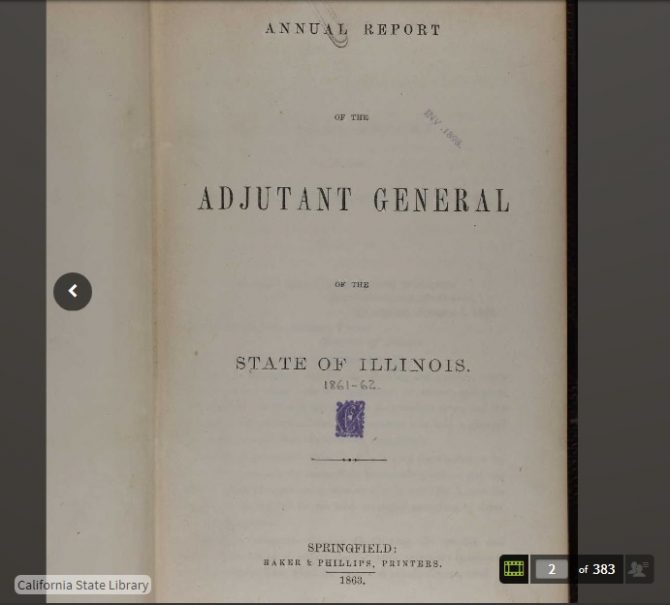 Fast forward to 2017: there is now a record collection in Ancestry Library Edition (Ancestry LE) that contains digitized versions of various state adjutant general printed reports plus selected additional state lists of military personnel. Military records from the following 25 states are included in this collection:

The records vary as to information provided and time periods covered. Some state reports list officers only; a majority cover officers and enlisted men. Coverage for a handful of states includes the Civil War or even earlier, but for most coverage begins with the Spanish American War (1898), the Mexican Border War (1916), or World War I (1917-1918). Information provided for each soldier may include:

The records can be searched by name, year, and state of service, or may be browsed by state and year of publication.

Note: State adjutant general reports for the Civil War years are also available as separate record collections in Ancestry LE for these states:

They can be located by doing a Title search in the Ancestry LE Card Catalog for adjutant.

There is a list of reference databases that SLPL subscribes to here.

Many of these databases can be used from home by persons with a valid SLPL library card, although Ancestry LE must be used at Central Library or one of our branches.