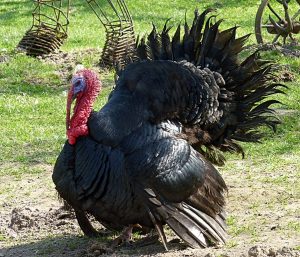 Turkeys are on everyone’s mind in November. Thanksgiving is just a few weeks away and you are beginning to decide when to buy your turkey so it is defrosted by the day you will be cooking it. Of course, you could be, or know, a hunter and will plan to enjoy a fresh wild turkey for your Thanksgiving dinner.

I have seen flocks of wild turkeys near where I live. There was a new highway built nearby that was once a clearing beneath power lines. It is always a pleasure to see wild deer and turkeys grazing in the domestic wilderness. Wild turkey populations have dwindled greatly, with some eastern and western states not having many left. However, I know that they will be tempted to walk through the streams that have no fencing. Hopefully, not getting onto the busy highway nearby.

The turkey industry has grown slowly throughout the nineteenth century. In the 1830’s W. A. Browning, a farmer, began keeping turkeys. After he retired he wrote a small pamphlet describing his success, “A Complete System of Raising Turkeys” (1873). It was not until 1905, when a turkey grower, E. A. Tully, began selling his birds by weight. Soon other turkey farmers followed suit. As the birds were sold by the pound, they soon were breeding bigger turkeys in an effort to make more money.

With changes in technology, soon turkeys were sold frozen. They were kept frozen and moved across the country in refrigerated rail cars. Large scale operations soon could invest in poultry research from agricultural experimental stations. Thus, today we have huge turkeys in our grocery stores. Unfortunately, most sold today are raised under conditions of intense confinement. The processing of turkeys has become very automated since the 1950’s.

Ever heard of butterball turkeys? The Butterball Turkey Company began in 1894. Peter Eckrich, an immigrant from Germany, opened a meat market in Fort Wayne, Indiana. By 1925 he had incorporated as Peter Eckrich and Sons, and had established branches in seventeen states!

An interesting fact about turkeys and the development of their industry,was that the U.S. Department of Agriculture, in the 1940’s and 1950’s, produced a brochure entitled “Turkey on the Table Year Round.”. This endeavor taught the public how to prepare and cook a turkey. Thanks to this publication in 1951 turkey production surpassed its wartime high with fifty-three million. By 1961, turkey growers had raised 107 million birds, more than twice as many as they had produced a decade before.

Although turkeys are usually bought in the months of October, November, and December, with Thanksgiving having the greatest sales, the development of turkey burgers, frankfurters, ground turkey, and meatballs increased the sale of turkeys year-round by the 1980’s.

As Swanson developed the “tv dinner” concept, turkey pies and ready-made turkey dinners became a popular frozen entree. Also, in the 1970’s Butterball pioneered a turkey lifter, that made it easier to remove a turkey from the roasting pan. Butterball also produced a self-basting turkey.

Today a turkey may be enjoyed during any time of the year. However, it is still is a favourite of the Thanksgiving season. Gobble, gobble, a turkey might say!