August M. Berens, also known as Gus, came up with the idea to name a playing card line "Bicycle." He was just helping his boss out. Gus worked for Russell Morgan and Company, a Cincinnati printing firm. In 1885, the company came out with a new pack of cards. However, they did not have a brand name. So, Gus suggested the current technological marvel of the time - the bicycle!  Thus, "Bicycle" became the brand name of these playing 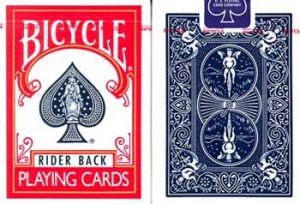 cards. (It was 1869 when an English inventor, J.I. Stassen, came up with the name "bicycle" for his two-wheeled vehicle!)