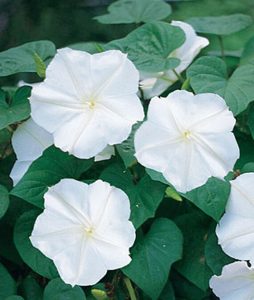 Just because our buildings are closed right now doesn't mean our plants aren't flourishing! We get many interesting donations for our seed library at Kingshighway, and most are donations of local plants like Echinacea and Shining Blue Star. But, one that has struck many of us are the Moonflower seeds. Moonflower, Ipomoea alba (formerly Calonyction aculeatum) is a night-blooming cousin of the morning glory; hence, one of the nicknames for this plant is "tropical white morning glory," which in itself is a mouthful to say. A perennial vine, it grows in the 10-12 hardiness zones, and is native to Mexico, Argentina, and Florida, among other places, and blooms from July to October.

In St. Louis, it is grown as an annual in moist well-draining soils in full sun, according to the Missouri Botanical Garden’s plant finder page. The nocturnal white flowers bloom at night, in the light of the moon, and emit a lovely fragrance. It is an easy plant to grow from seed, and you can sow indoors as early as three weeks before the last frost, although Burpee’s recommends that sowing outdoors occurs in early May. It can grow from ten to fifteen feet in height and spread to about six feet out in width. The vines are hardy and dark green in color, as are the leaves, which fan out, bringing out the ethereal color of the flower at night. The seeds are easy to harvest on your own -- however it is tricky to determine the most mature seeds, which are the best seeds to collect. Per advice from Jenny Harrington on SF Gate, "The seeds aren't mature until the pods turn brown and brittle, but you must pick them before they split open and spill the seeds. Each pod contains between two and four round seeds that are white or light tan in color."

This beautiful plant is resistant to deer and has no other issues concerning rot or pests, which makes them a perfect addition to your yard as decorative foliage.  One thing to consider is that the flowers do eventually fall off, and only seem to bloom at night alone, so be prepared to wait to view your blooms and for a potentially messy clean up at the end of the season. 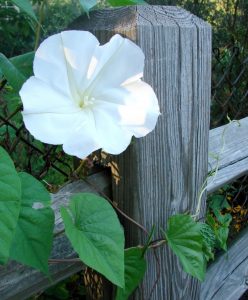