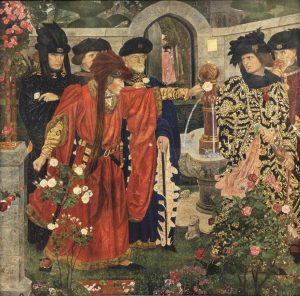 With the last episode of Game of Thrones approaching, you may feel that you’ve already lived through as much subterfuge, twists, turns, thrills, horror and heartbreak to last you a lifetime. However, if you find yourself wanting more, we suggest you turn to the real history that inspired George R.R. Martin’s Game of Thrones stories: The Wars of the Roses.

These series of battles were decades-long feuding by two squabbling families of prominence, the Lancasters and the Yorks. Their conflict began after The Hundred Years’ War, which created financial and social problems that revived an interest in Richard, the Duke of York’s claim to the kingship. The eventual mental problems suffered by Henry VI only added more fuel to the conflict. While neither family had, of course, frozen walking dead to contend with, or dragons at their command, there was plenty of shifting loyalties, intrigue, scheming and fighting and was a brutal and convoluted series of events. Sound familiar? The Battle of Towton in 1461 is still considered the bloodiest battle ever fought on English soil (and you can compare this to The Great War in Game of Thrones, minus the frozen walking dead). While Martin used the Wars of the Roses at the core to inspire his fantasy world and stories, the appeal of reading about these kinds of feuds (and the intrigue, strategizing, double-crossing and battles) is something that continues to fascinate many of us.

So who would be who in Martin’s world versus the real Wars of the Roses? The Lancaster family can be seen as a parallel to the Baratheons, with Henry VI being a counterpart to Robert Baratheon, a king who ruled mostly by the suggestions of his advisors. He was married to Margaret of Anjou, a beautiful and ruthless woman who is the clear counterpart to Cersei Lannister. Richard of York, the king’s closest advisor, is our Ned Stark. Margaret’s real-life son, Edward of Westminster, was Martin’s inspiration for Joffrey Baratheon (although no word on whether or not Edward was quite as nasty as Joffrey). And what about the other side? Henry Tudor was a direct descendant of the first Duke of Lancaster, raised in exile after his father’s death. He won the support of the York forces, raised an army in France, crossed the English Channel, and defeated Richard’s forces. Sounds an awful lot like Daenerys Targaryen, right? While Henry had no dragons, he was able to marry Elizabeth of York, link the Lancaster and York families together, and end the Wars of the Roses.

For those of you who enjoy the war + dragons angle of Martin’s stories, we suggest Naomi Novik’s Temeraire series, which is a fictional re-telling of the Napoleonic Wars that adds in dragons. Novik brings a lot of real-life historical detail to these stories and by the time you’re halfway through the first book, you’re believing that there could totally have been dragons in the world at that time.  The first book in the series is His Majesty’s Dragon, which we have available as a print book, audiobook and eBook. 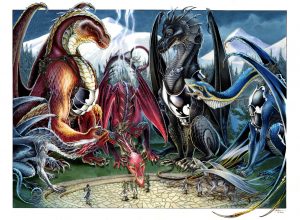