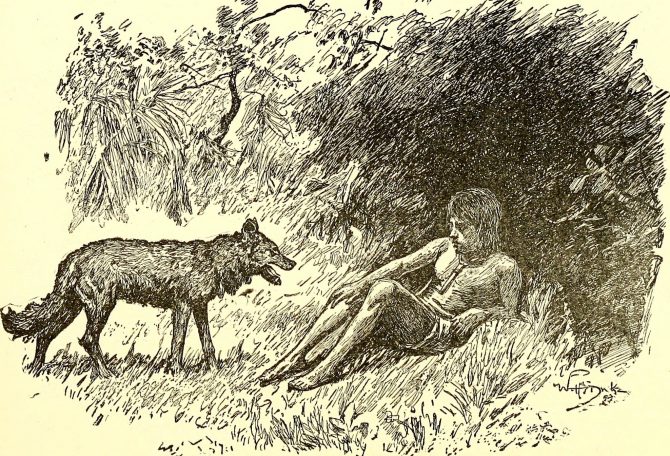 Feral children have been part of our cultural legacy for millennia. Romulus and Remus, raised by a wolf, became the founders of Rome. Wild animals raised one of Gilgamesh’s friends, and Twelfth Century Arab writers chronicled young boys who overcame their wild upbringings to become philosophers and scientists.

Mowgli is undoubtedly literature’s most famous modern example. Introduced in 1894’s The Jungle Book, Rudyard Kipling’s stories were heavily influenced by his childhood as a boy living in British India. Although his stories have found a legacy as part of Disney’s canon, his original stories remain controversial and encouraged the racial prejudices of the time. “The White Man’s Burden,” a poem written by Kipling three years after the publication of The Jungle Book, wrote that those under imperialist rule were “new-caught, sullen peoples, / half devil and half child.”

In the Seventeenth and Eighteenth Centuries, the sweep of Enlightenment thinking brought new meaning to feral children and “noble savages” as emblematic of worldviews that purport humanity’s innate goodness, especially when pitted against the corrupting influence of civilization. The ideas of nature versus nurture in defining humanity was a controversial topic amongst the era’s philosophers. It was during this period that several cases came to define the archetype and later captured the interest of European New Wave filmmakers.

Victor of Aveyron emerged from a French forest in 1800 having lived on his own for an unknown number of years. Young medical student Jean Marc Gaspard Itard took the young Victor under his tutelage, determined to prove that empathy and language were what separated humanity from animals. By all accounts, Itard was a compassionate figure, though he did resort to inhumane practices such as electroshock therapy in an attempt to restore hearing to his deaf students. Although he was unsuccessful in rehabilitating Victor, his teachings echoed in later educators like Anne Sullivan, who famously worked with Helen Keller. François Truffaut portrayed Itard in his 1970 film L’Enfant Sauvage.

Kaspar Hauser was a more controversial figure. He appeared in Nuremberg in 1828 with a letter claiming that he was raised in isolation and wanted to join the cavalry. Accounts of his physical and mental well-being differed, due in part to Hauser’s contradictory stories about his life. He became a cause célèbre, and moved around the area under the care of many sponsors. Hauser’s behavior and outright falsehoods eventually soured all of these relationships. Hauser died at the age of 21 of a stab wound in the chest. Although he claimed he was attacked, later accounts suggest the wound was self-inflicted. Hauser’s story was the basis for Werner Herzog’s 1975 film The Enigma of Kaspar Hauser.

More recently, Marina Chapman is a Colombian-born woman abducted at the age of five who spent her childhood living with a group of Capuchin monkeys. Initially ignored by them, she slowly integrated into their group. She lived with them until she came across some hunters who sold her into a brothel. Thus began a traumatic series of events that eventually lead to being adopted by a family and sent to England. As she settled into a normal life, her memories returned and her shocked family heard bit by bit the story of her childhood. Her account, as fanciful and unbelievable as it may seem on first blush, tests the credibility of a narrator and the reliability of memory.

The Girl With No Name

A modern interpretation of many of these stories suggest children who were living with severe trauma either due to abandonment or neglected developmental issues. Many of the contemporary accounts were either outright fabrications or very heavily slanted to support a philosophical worldview. The reasons these stories remain so compelling is their fantastical survival in the most precarious of circumstances, but the reality of their lives -- not to mention how they were treated by most of the adults they met in civilization -- is far more grim. More modern examples highlight the effects of abusive and nonsocial upbringings and have less to do with the philosophical musings and chin-stroking of bygone academics.