The Steedman Architectural Library of the St. Louis Public Library was a gift from George Fox Steedman (1871-1940). Mr. Steedman (pronounced "stedman") was president of the Curtis Manufacturing Company, a St. Louis firm that manufactured industrial machinery. He had a great love of historical architecture and was a talented silversmith. In the early years of the twentieth century, he traveled in Europe purchasing many of the most influential and beautiful architectural books ever published, with St. Louis architect Louis LaBeaume as his adviser.

In 1928, he donated the valuable library of important architectural books that he had assembled to the St. Louis Public Library's Art Department. He also paid for a special room to be designed and built to house the collection, and created an endowment for future purchases. The room, designed by leading local architectural firm Mauran, Russell, and Crowell to evoke a 16th century English gentleman's library, opened in 1930.

Steedman's express purpose for this generous gift was “to develop better architectural work in St. Louis” by providing access to “books of an inspirational character to students and practitioners of architecture” and its allied arts.

He also asked the Library to involve the St. Louis Chapter of the American Institute of Architects in the selection of books for the collection. To this end, the Chapter appoints a committee of advisers to recommend acquisitions and support the librarian. 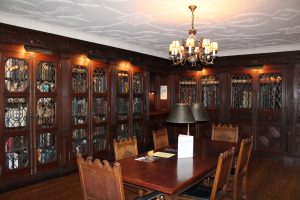 The original library of about 600 volumes was extremely rich, as it included such titles as the 23-volume folio set of the works of Piranesi; 16th century editions of Vitruvius, Palladio, and Alberti; works by Pugin, Viollet-le-Duc, Robert Adam; and much more. Over the years it has been greatly enhanced by judicious and enlightened acquisitions and donations, and now comprises over 1500 volumes. Its strengths are in Classical, Western European, and Early American architecture, and it now includes influential 20th century works, including early Frank Lloyd Wright publications, tracts by Louis Sullivan and Le Corbusier, and Burnham's Plan of Chicago. Recent acquisitions include books by and about contemporary architects such as Tadao Ando and Zaha Hadid.

A catalog of the collection was published in 1973, and a supplement was produced in 1983. Now almost all of its holdings have a catalog record in the SLPL online catalog (https://www.slpl.org/catalog/).  Researchers who need to consult particular volumes can do so by making an appointment with the Art Department staff. An exhibit of some of the collection's most beautiful books can be seen at:  http://steedman.slpl.org/