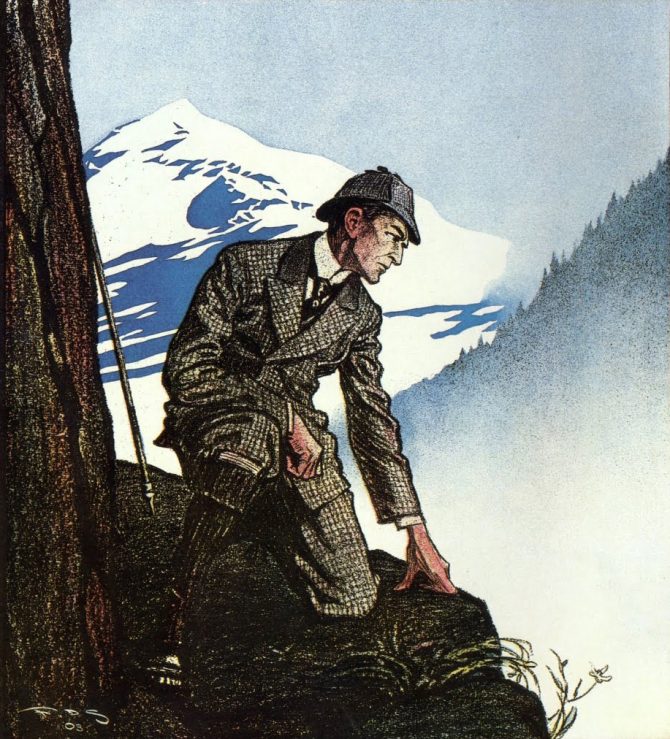 Sherlock Holmes is the most widely adapted characters in all of literature. Only Dracula can rival his screen appearances. Holmes' first appearance was in the thirty second long film Sherlock Holmes Baffled. Unfortunately, the name of the actor was lost to history. Since then, over seventy-five actors have portrayed Holmes in hundreds of films. Over the years, there have been arguments over who played the "definitive" version. Basil Rathbone, John Barrymore, Robert Downey, Jr., and Benedict Cumberbatch each have their ardent supporters.

Below are some of the many Holmes adaptations available for streaming or download via Hoopla, which is free with your Saint Louis Public Library card.

Mr. Holmes (2015) - See the world's most famous detective as you've never seen him before. For thirty years, Sherlock Holmes has been haunted by his final case, one that remains unsolved. Now, spurred by a mysterious trip to Japan, Holmes quietly slips out of retirement to confront the ghosts of his past - and a spellbinding mystery that will take all of his deductive powers to solve. Ian McKellen stars as Sherlock.

Sherlock Holmes (1922) - When a young prince is accused of a crime that could embroil him in international scandal, debonair super-sleuth Sherlock Holmes comes to his aid, quickly discovering that behind the incident lurks a criminal mastermind eager to reduce Western civilization to anarchy.

Sherlock Holmes: The Woman in Green (1945) - Holmes and Watson investigate murders and the trail leads to a society of hypnotists and a beautiful woman. It also looks as if the notorious Moriarty is involved.

Sherlock (2002) - This made for cable movie focuses on the young 20-something Sherlock Holmes. As the movie opens, Sherlock is in pursuit of the evil Moriarty and apparently shoots him to death, but his body cannot be found as he falls in a sewer. Ah, but anyone who knows the Holmes mythos knows that Moriarty is not so easily killed.