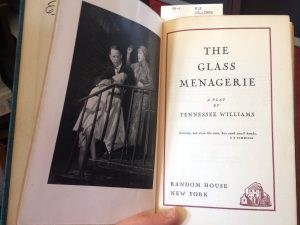 The inaugural Tennessee Williams Festival St. Louis is happening this week and weekend at multiple venues in and around Grand Center. Numerous events celebrating the Pulitzer Prize-winning playwright are being held, including an Al Hirschfeld caricature art exhibit, a reading of Williams’ family letters, and the screening of the film A Streetcar Named Desire in the open-air Public Media Commons. Unfortunately for me, it looks as though I’ve missed my opportunity to see Upstream Theater’s production of The Glass Menagerie at the Kranzberg Arts Center since the remaining performances are completely sold out. 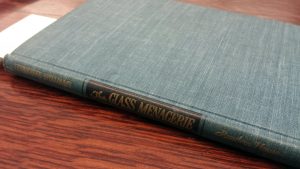 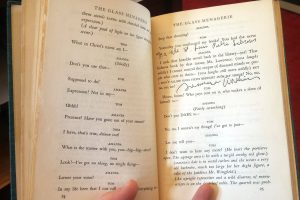 After premiering in Chicago in December 1944, the autobiographical family drama moved to Broadway the following March, suddenly turning the native St. Louisan into a star. As chance would have it, I had pulled our first edition copy of the play for a patron recently and was delighted to find it signed by Williams. Instead of writing on one of the book’s front endpapers, as is customary, he cleverly juxtaposed his inscription – For the St. Louis Public Library, Tennessee Williams – with a passage on page 25. During a heated exchange between lead characters, mother and son, Amanda and Tom Wingfield, Tom exclaims, “Yesterday you confiscated my books! You had the nerve to -”. Amanda interrupts, “I took that horrible novel back to the library – yes!..”

We have a number of Williams’ other first editions in Rare Books and Special Collections. The two I looked over today were A Streetcar Named Desire and Cat on a Hot Tin Roof, both published by New Directions in 1947 and 1955, respectively. Neither are signed, however, they do have their original dust jackets which feature terrific artwork by Alvin Lustig, who was a prominent graphic designer. 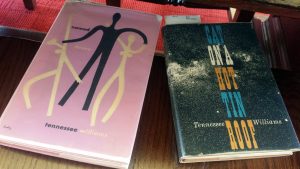