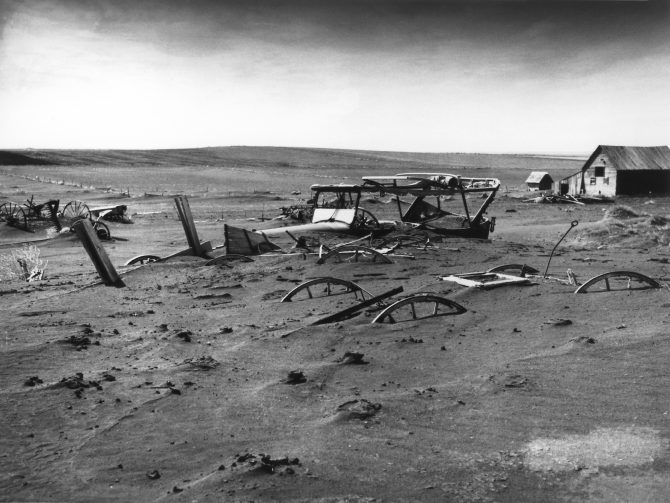 Despite its massive impact on American agriculture and commerce, the Dust Bowl is misunderstood. As a child, I thought that it was simply a period of drought, where hardscrabble farmers struggled to make ends meet. The truth is much, much worse. Reckless farming practices removed thousands of acres of topsoil that acted as an anchor against wind and drought. The years that followed were both historically dry and hot, and the land was battered by ceaseless dust storms called "rollers." The most destructive was Black Sunday (April 14, 1935) where storms upended 300 million tons of dust, destroying towns and choking those in its path. It was in a reporter's account of this storm that the term Dust Bowl was coined.

The effects of that storm were felt in Washington, and the Soil Conservation Act followed. FDR's New Deal and its reforms helped the government and the farmers coöperate on a solution. The period had a lasting effect on our culture. John Steinbeck and Woody Guthrie each helped to personalize the farmers' struggles during this miserable and hellish time. In 2007, New York Times reporter Timothy Egan wrote The Worst Hard Time, a moving and detailed account of the period, and in 2012, Ken Burns released a definitive long form documentary on the subject. Author Lydia Reeder chose a different route, instead chronicling the unlikely basketball team made of Oklahoman women farmers.

The Grapes of Wrath