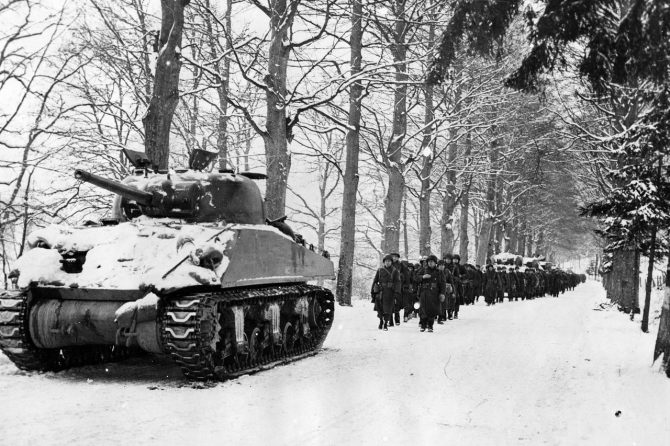 The Battle of the Bulge was the last major German offensive of World War II.  It began on 16 December 1944, when the German forces broke through Allied defenses in the Ardennes. The Germans intended to seize Antwerp, which would split Allied forces in the west, and bring about the surrender of one or more Allied armies. Bad weather (bitter cold and heavy snow) hampered Allied air and supply operations, but also hindered German movements. Improved weather conditions soon allowed Allies forces to reinforce weak points in the their lines, and to resume air operations against German offensive positions and supply lines. By the end of January 1945, American units had regained all ground lost and were advancing while the Red Army had begun a winter offensive in the east. Soon, remaining German troops found they were in a trap from which there was no escape with enemies closing in on both sides. American forces suffered nearly 75,000 casualties during the Battle of the Bugle, including 19,000 soldiers killed in action. The Germans suffered somewhere between 80,000-1,000,000 casualties, which irreparably damaged their ability to resist the advances of the Allied Army from the west and the Red Army from the east.

The library has many great resources where one can learn more about the Battle of the Bulge including: