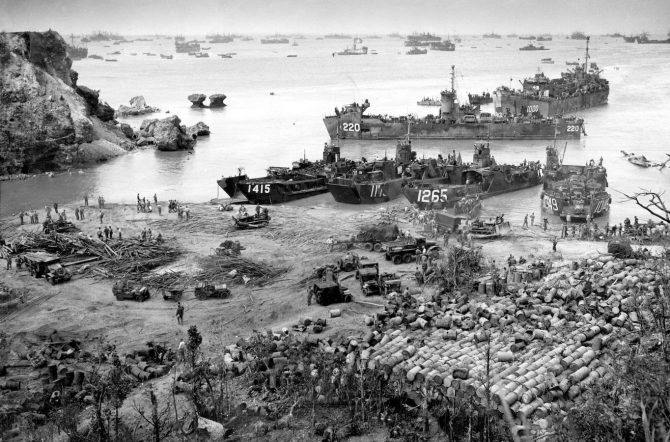 The Battle of Okinawa was the last major land battle in World War II's Pacific Theater, and ranks as one of the bloodiest contests in either theater. It began on April 1, 1945 when the Navy's Fifth Fleet and more than 180,000 Army and Marine Corps troops converged on Okinawa in a final decisive push towards the Japanese home islands.

The Fifth Fleet then delivered one of the most intense naval bombardments ever in an effort to soften Japanese defenses prior to troop landings. Troops landing on Okinawa initially met little resistance. Wave upon wave of troops, tanks, ammunition and supplies were ferried ashore within hours.

The island of Okinawa consisted of 466 square miles of rocky ridges and ravines, trees, and dense foliage, making it an ideal location for a Japanese last stand.  As American troops moved further inland, they began to encounter enemy resistance, including a heavily fortified system of caves, tunnels, bunkers and trenches.

The Battle of Okinawa lasted nearly three months, ending on June 22, 1945.  American forces suffered approximately 45,000 casualties, including 12,500 killed. Japanese losses were even greater, approximately 110,000 overall (including numerous Okinawan conscripts forced into service). That figure also included many Japanese who chose death by suicide rather than surrender to American forces: many shot themselves, others jumped from high hills, while some blew themselves up with grenades.

The main purposes of the battle were to provide the United States with landing strips for air assaults on the Japanese mainland, and staging areas for the planned invasion of the Japanese home islands.