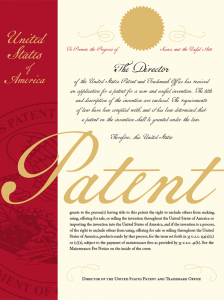 Joseph Marron and Raytheon Company is the assignee.  The application was filed on March 10, 2015, which gives an idea of the length of time it takes for a patent application to move through the process and be granted.

The USPTO put together this page to celebrate the ten millionth patent. It has a short video that explains the establishment of the patent system, and an animated timeline infographic that goes from 1790, when the first patent was granted, up to the present, with examples of fun patents along the way.

The redesigned patent cover, unveiled in March and shown on the right, was first issued to the ten millionth patent, and to all subsequent patents.

[This is the ten millionth utility patent. So far, there are 821,680 design patents and 29,435 plant patents as well. That's a lot of patent protection!]