The Super Bowl, the championship game of the National Football League. This day is the second-largest day for U.S. food consumption, after Thanksgiving Day. And we all watch for the commercials that are well-known for their unpredictability, humor, and use of special effects. These titles from our digital collections will give you a bit of history of past Super Bowl games. 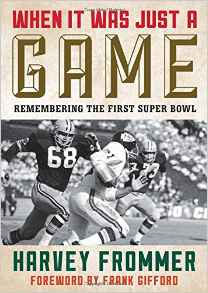 Written by acclaimed sports author and oral historian Harvey Frommer and with an introduction by pro football Hall of Famer Frank Gifford, When It Was Just a Game tells the fascinating story of the ground-breaking AFL–NFL World Championship Football game played on January 15, 1967: Packers vs. Chiefs. Filled with new insights, containing commentary from the recently discovered unpublished memoir of Kansas City Chiefs coach Hank Stram, and featuring oral history from many who were at the game—media, players, coaches, fans—the book presents back story and front story in the words of those who lived it and saw it go on to become the Super Bowl, the greatest sports attraction the world has ever known. Archival photographs and drawings help bring the event to life. 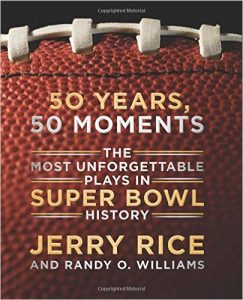 In commemoration of the fiftieth anniversary of America's most beloved sporting event-the Super Bowl-an authoritative collection of the most pivotal plays through the decades, compiled by the legendary Jerry Rice, and illustrated with dozens of color photographs. 50 Years, 50 Moments celebrates five decades' worth of memories, insights, and personal experiences of Super Sunday. Super Bowl MVP Jerry Rice has compiled his list of the most iconic, strategic, and record-breaking moments in football history from the Super Bowl's inception to today-from the Green Bay Packers and Kansas City Chiefs in Super Bowl I; to the amazing Miami Dolphins championship in Super Bowl VII that capped their seventeen-game undefeated season; to the heart-stopping Super Bowl XXV in which the New York Giants beat the Buffalo Bills 20-19; and Super Bowl XLIX's amazing last-second victory by the New England Patriots over defending champion Seattle Seahawks 28-24. A Hall of Fame wide receiver who has played alongside and against some of the greatest players in the NFL, Jerry Rice, joined by accomplished sports researcher and journalist Randy O. Williams, draws on his intimate knowledge and insight of the game to highlight remarkable moments from this greatest game in modern sports. Rice's access to the NFL means that 50 Years, 50 Moments is chock full of memories and insights directly from the athletes and coaches who were involved in these moments. 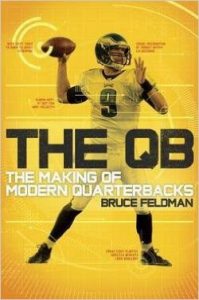 In the world of modern football, with NFL teams worth more than a billion dollars, no position defines a franchise like the quarterback. The QB is the story of a year in the making of those star players, and of the most significant year in QB development in sport's history... with the meteoric rise of various quarterback gurus finally coming to light. George Whitfield, profiled in the New Yorker and called the "Quarterback Whisperer," gets a regular spot on ESPN's College GameDay, Trent Dilfer, former Super Bowl quarterback, starts his own qb business, Steve Clarkson, another qb maker, gets profiled on 60 minutes, among many others. It is also the year 5'10" Russell Wilson wins the Super Bowl and for the first time in over 60 years a sub-6-foot QB, Johnny Manziel, gets drafted in the first round, forcing NFL power brokers to re-examine how they look at the position--and the game. 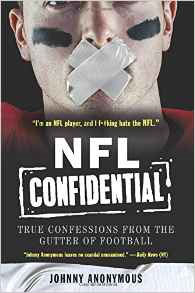 A current pro player takes fans on a pseudonymous trip through one of the most infamous years of football—the very long, sometimes funny, often controversial 2013-2014 season—sharing raucous, behind-the-scenes, on-the-field, and in-the-locker-room truth about life in the National Football League. "Well, to hell with being safe. I'm going to be honest." Johnny Anonymous' life goal was to be nothing greater or less than the Best NFL Back-Up of All Time™. For two years, he was content earning hundreds of thousands of dollars to stand on the sidelines doing absolutely nothing. But early in his third year, a starting lineman is injured, and he suddenly finds himself on the field."

Find some great tasting recipes at the Spirit of Tailgating blog.