Due to equipment failure, Barr Library will be closed on Thursday, July 9. 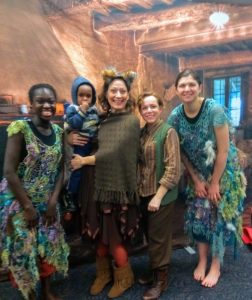 It was cold, windy and flurries were just starting to bounce off my windshield, when I arrived an hour and 15 minutes early to set up for our Storytime Theater production of “The Elves and the Shoemaker” on Monday at our Divoll Library.

As I was unpacking our set, a tiny face peeked in the room and smiled at me. I smiled back, and he came running in and hugged my legs. His name is Izaiah Winston. He has been waiting on this day for more than a month. Izaiah saw his very first play here at Divoll over a month ago and his mom, Ralanda, said, “He has been talking about it non-stop. He told everybody at Thanksgiving, that he got to be in a play, and he got to be the king!”

Three-year-old Izaiah participated as an audience volunteer and was crowned the new King of Scotland in last month’s Storytime Theater’s “Mactragedy!” It left quite an impression.

Izaiah came extra early to help us set-up for the play because he was so excited. Izaiah joined 75 other young people and their caregivers to see the tale of “The Elves and the Shoemaker.”

He sat in the front row with some slightly older kids, just like a seasoned theatre patron. I asked Izaiah if he had fun at the show, even though he wasn’t crowned King in this one and his answer was a “YES!”

He stayed to take a photo with our cast, then told me he would be back to see “the next one!”  I told him I thought that he would really enjoy the next play because there is a magic fish in it.  His eyes lit up and we all felt so grateful to share this spark of magic with a three year old, so full of wonder and enthusiasm.

Thank you Izaiah, we are so grateful to you and all the other wonderful people who share our stories. Happy holidays!

---Aarya Sara Locker is Manager of Community Engagement and the Director of our Storytime Theater series.