Steampunk is a sub-genre of science fiction or science fantasy that incorporates technology and aesthetic designs inspired by 19th-century industrial steam-powered machinery. Steampunk fashion is based on the influences from the Victorian era, embellished with steampunk fiction. Women's fashion includes corsets, gowns, and a small headpiece. Men's fashions are suits with vests, longcoats and top hats. Steampunk outfits are accented with several technological accessories such as timepieces, parasols or driving goggles. Check out some of the eBooks from our digital collection to get hip with Steampunk fashion, make your own Steampunk jewelry, and read stories from the genre. 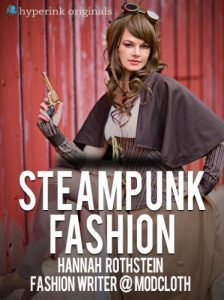 The gateway to the intoxicating experience of the subculture, steampunk fashion has an element of interest for almost everyone, whether they're a history buff, craft creator, or giddy free spirit. Though it sprawls across literature, music, art, film, and more, steampunk - a sort of retro-futuristic Victorian fantasyland - is a movement most easily recognizable, especially for those unfamiliar with it, by its fashion.Now that the subculture is chugging full steam ahead onto the radar of the general public, it's important to remember and embrace the depth behind steampunk style; we can't have the whole aesthetic become irrigated by canals of triteness, after all. But if steampunk style is more than just goggles and gears, what is it? 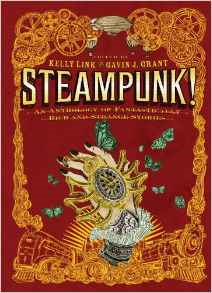 Imagine an alternate universe where romance and technology reign. Where tinkerers and dreamers craft and re-craft a world of automatons, clockworks, calculating machines, and other marvels that never were. Where scientists and schoolgirls, fair folk and Romans, intergalactic bandits, utopian revolutionaries, and intrepid orphans solve crimes, escape from monstrous predicaments, consult oracles, and hover over volcanoes in steam-powered airships. Here, fourteen masters of speculative fiction, including two graphic storytellers, embrace the genre's established themes and refashion them in surprising ways and settings as diverse as Appalachia, ancient Rome, future Australia, and alternate California. Visionaries Kelly Link and Gavin J. Grant have invited all-new explorations and expansions, taking a genre already rich, strange, and inventive in the extreme and challenging contributors to remake it from the ground up. The result is an anthology that defies its genre even as it defines it. 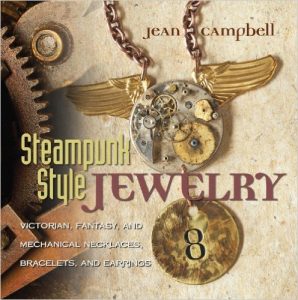 This how-to jewelry-making book features the work of an array of invited jewelry designers influenced by the growing Steampunk trend. In Steampunk circles, jewelry-makers are often master metalsmiths who combine found objects with fine metals to create elaborate pieces. In Steampunk-Style Jewelry, the projects focus on "no fire" techniques-like simple stringing, wirework, hammering, stamping, gluing, stitching, and off-loom beadwork-so that even a beginner can create pieces in the style. Each project provides a complete materials andtools list, step-by-step instructions, and clear illustrations. This book offers a broad overview of a growing design trend that is part of the literary, industrial design, fashion, and popular culture scene. Readers will learn about the art movement through the many photographic sidebars that explore the many aspects of the trend. 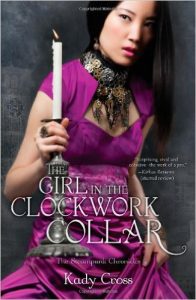 Finley Jayne and her "straynge band of mysfits" have journeyed from London to America to rescue their friend Jasper from the clutches of a devious criminal demanding a trade--the dangerous device Jasper stole from him...for the life of the girl Jasper loves. One false move from Jasper, and the strange clockwork collar around Mei's neck tightens and tightens.