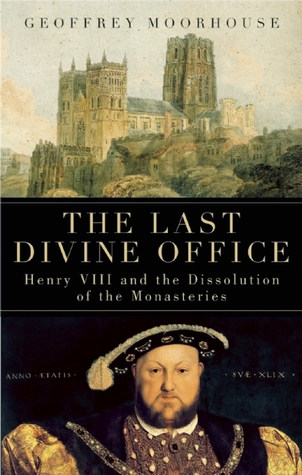 This week's Staff Pick comes from Dennis, who wrote about The Last Divine Office by Geoffrey Moorhouse.

The Last Divine Office is a portrait of the English Reformation as viewed from the choir stalls at Durham Cathedral. The book begins with an extended history of the cathedral, the attached Benedictine monastery which supplied its clergy, and the shrine of St. Cuthbert which provided its focus. Events in the outside world are kept largely in the background as the monks cycle through the birth, life, death, and resurrection of their Lord in the liturgical year, year after year, with the archbishop and monastery steadily growing in wealth and influence. Even after Henry VIII's break with Rome, life for the monks continues more or less as normal, even as the process of accretion reverses, with the monastery's holdings methodically stripped away layer by layer to feed the royal treasury. By the end of Elizabeth's reign, the monastery was a shadow of its former self, but, as Moorhouse reveals, an oddly substantial shadow.

Moorhouse covers the subject with skill, sweeping through centuries of history without becoming either boring or superficial. Most importantly for the story he has chosen to tell, he ably conveys a sense of place -- the reader is able to smell the accumulated reside of centuries of incense, hear the echoes of the Latin chants, feel the impress of the personalities of the patron saints as they shaped the history of the community. Less convincingly, Moorhouse portrays Cuthbert Tunstall, who served as Prince-Archbishop of Durham from 1530 to 1559, under Henry VIII and all of his children, as the model of an Anglican bishop -- able to bend with the passions of the day in order to preserve what is most worth preserving. Unfortunately, this seems to neglect the lessons of Tunstall's own experience, which led the man who took the Oath of Supremacy under Henry to refuse to do so under Elizabeth.