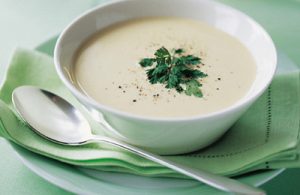 Whether summer, spring or fall, soups are a delicious way to start a meal. In the summer months, cold soups are great to offer a guest. In Saint Louis, with heat and humidity reaching 120 F, definitely a cold soup will make your guests cool down. A classic vichyssoise soup contains the white part of a leek, butter, thinly sliced onion, and potatoes peeled and thinly sliced. Your spices will be fresh thyme, marjoram, and a bay leaf.

My favorite part of making soup is at the beginning and at the end. I enjoy making my own stock. It gives a flavorful foundation that you could never find in a store. A simple stock that I use for several other recipes is a chicken stock. I usually make a stock after I have had a roast chicken dinner. I place a huge pot on my front burner and turn it on high. I then add my chicken bones that usually are left over from the night before dinner. The extra meat comes in handy to provide a great flavor with spices used on my chicken used to flavor the soup.

There are several types of broth used to make soup. These include: beef, chicken, fish, veal, and vegetables. Each type of broth takes between twenty to thirty minutes to make. Preparation time is under fifteen minutes. A fish broth starts with rinsing fish bones with cold water. Then you add these bones into boiling water along with any fish meat. By adding dry white wine, lemon juice, salt, thyme, a sliced onion, chopped mushrooms, parsley, and a bay leaf, your stock will be delicious.

After reducing your stock, covering it, and letting it simmer for 30 minutes, your result will be a fish stock. After it cools, strain the broth through a cheesecloth lined sieve. Discard the bones and any other solids. Use your broth immediately, or freeze up to 6 months.

Whenever I make a beef broth, I always flavor it with chopped carrots, onions, mushrooms, celery, and season it with a bay leaf, several peppercorns, about five sprigs of fresh parsley, and fresh thyme. With a beef stock I first brown my meat before adding about six cups of water. As with a fish broth, once boiling, turn it to simmer and cook for two to three hours. Let cool, then strain the broth to have a clear broth. Again, use immediately, or store in your freezer up to 6 months. A veal broth is prepared the same way as for a beef broth.

Making a vegetable broth is much easier than a meat broth. Instead of browning meat, you add your vegetables to the boiling water. Include any type of mild vegetable for flavoring, such as: peppers, carrots, celery, leeks, mushrooms, spinach, zucchini, and potatoes). Continue to add a chopped onion, fresh herbs (thyme, basil), and several parsley sprigs. Use salt, freshly ground pepper corns, 2 bay leaves, and 5 chopped cloves of garlic.

A familiar soup that I grew up with, mostly in the wintertime, was a delicious beef barley soup. I begin with browning stewing beef or beef shanks, then once nicely browned on both sides I add water to cover generously. After bringing the water to a boil, plus adding a cup of rinsed pearl barley, four chopped carrots, five sliced mushrooms, and salt and pepper to taste.

You do not have to be Irish to enjoy a corned beef, barley and cabbage soup. Start your soup by browning a beef brisket. Once browned, add chicken broth and bring to a boil. Stir in diced onions, diced savoy cabbage, one diced celery stalk, 1/4 cup of barley, 3 crushed garlic cloves, five sprigs of parsley, a bay leaf, fresh thyme, and crushed black peppercorns. Season with salt when cooked. Once your mixture is boiling, reduce to a simmer, cover with a lid, and cook for about 2 hours.

So, as we move into the hot and humid summer months, consider the cool cucumber soup or a fresh berry soup. It is all a matter of taste!

The Best Soups in the World