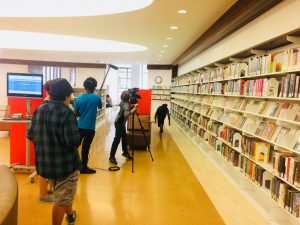 And...action! Today, a murder mystery unfolded in the Center for the Reader. Upstairs, an action-drama played out. Teens directed and recorded the scenes, following the actors—also teens—with large cameras and boom mics. This is the second week of the sixth annual SLIFF Kids film camps, which Cinema St. Louis hosts in Creative Experience every summer. Tuesday is shooting day. By Friday, these campers, ranging in age from 11 to 15, will be screening their completed films for friends and family, and maybe a few passersby.

Cinema St. Louis partners with Lindenwood and Webster Universities to make the SLIFF Kids film camps free to young library patrons, and this year the offerings are more robust than ever. We are in the midst of three sessions led by filmmaker and educator Rachel Hatfield that are part of The Library’s summer camps. After these two weeks of Live-Action camps, a new cohort of teens will convene in Creative Experience for a week of documentary production.