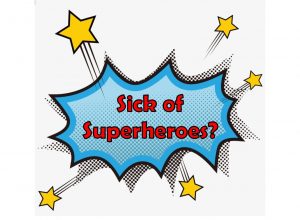 Graphic novels have developed beyond an underground following and taken the publishing industry by storm. These books are not the funny pages in your local paper, and go beyond the longtime success of Marvel and DC. Don't get us wrong, we still love The Family Circus and Superman, but we are seriously impressed by the variety and subject matter in the graphic novels we see on our shelves.

If you’re not reading graphic novels, you're missing out. Graphic novels are far from a new phenomenon; this type of storytelling has been harnessed for centuries. Think cave drawings, hieroglyphics, and medieval tapestries. All of these feature stories told primarily through pictures. Today's graphic novels are flexible in their purpose; some stories are just plain fun while others tackle serious subject matter, even more are found as required reading in college courses.

While most of the library is classified by content, graphic novels are classified by format—meaning you'll find horror, science fiction, fantasy, contemporary realism, historical fiction, poetry, and yes, nonfiction, inside their covers. There is something for everyone in our graphic novel section, so what are you waiting for?

My Favorite Thing is Monsters by Emil Ferris
Fairly unknown when she submitted her manuscript, Ferris’s astonishing graphic novel has catapulted her into the known. The story is presented as a journal of a 10 year-old Karen Reyes and is set in late ‘60s Chicago as she tries to solve the murder of her upstairs neighbor.

How to be Happy by Eleanor Davis
This graphic novel is actually a collection of short stories. The collection represents the best stories she has drawn since the mid-2000s. You don’t want to miss this compelling combination of art and narrative.

A Contract with God by Will Eisner
This 1978 work is widely considered the first modern graphic novel. It is comprised of four interwoven stories set in the mythical Dropsie Avenue of the Bronx. The Eisner Award, intended to recognize achievements in comics, is named in his honor.

Maus by Art Spiegleman
This incredible nonfiction graphic novel depicts the author, Spiegelman, interviewing his father about his experiences as a Polish Jew and survivor of the Holocaust. Within the novel Jews are depicted as mice and Germans as cats. It is the first and only graphic novel to win a Pulitzer Prize.

March: Book One by John Lewis
This is the first volume of three, of the autobiographical perspective of the Civil Rights Movement by John Lewis.

Locke & Key by Joe Hill
This series is written by Stephen King’s talented son, do you still need convincing? This graphic novel series is hailed as a “modern masterpiece” and has already been adapted into a Netflix series which debuted in February of 2020.

This is just a tiny taste of the innovation and variety of graphic novels you can find at SLPL. We invite you to take a trip to your local branch (or come visit us in the Center for the Reader at Central Library) and take a few home!