All SLPL locations will be closed from Nov. 26-29. Curbside service begins Nov. 30. 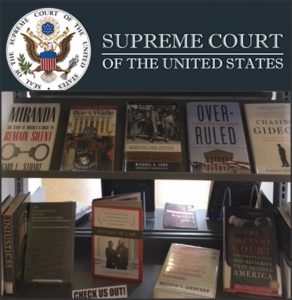 The judicial Power of the United States, shall be vested in one supreme Court, and in such inferior Courts as the Congress may from time to time ordain and establish. The Judges, both of the supreme and inferior Courts, shall hold their Offices during good Behaviour, and shall, at stated Times, receive for their Services, a Compensation, which shall not be diminished during their Continuance in Office.

The U.S. Supreme Court begins its term on the 1st Monday in October of each year, and in anticipation of the SCOTUS "opening day" we assembled a book display. With recent developments regarding the nomination of Judge Kavanaugh for the vacancy created by the retirement of Justice Anthony Kennedy, the Supreme Court is getting a lot more attention than it might normally. If you find yourself curious about the Court, its current members, its past members, previous controversial confirmation hearings, and landmark cases, please visit the Library & peruse the shelves in and around the 346.732 call numbers, visit our display while it is up, or search the catalog to place a hold & summon a book (or several) to a branch near you.

The Court has agreed to hear 38 cases so far for the 2018-2019 term, and oral argument for 22 of those has been scheduled to date with issues ranging from Constitutional to civil (most of the docket) to criminal, with a handful dealing with sovereigns and sovereignty. We gleaned this information at a recent program, "The Upcoming SCOTUS Term" presented by St. Louis University professor Morgan L.W. Hazelton, Ph.D., at the Law Library Association of St. Louis in the Civil Courts Building, where Dr. Hazelton highlighted certain of the cases on the docket, and gave her insights on She also shared resources to help the general public follow along, including the Court's website, linked above, SCOTUSblog, and "A Look Ahead: Supreme Court of the United States October Term 2018" from the Supreme Court Institute at Georgetown University Law Center.