There's no shortage of book-to-film adaptations out there, and usually they're pretty easy to spot: everyone knows The Shining is based on The Shining, The Hunger Games is based on The Hunger Games, etc. But that's not always the case. Now and then a book will be adapted for the screen but given a totally new name, one deemed more appealing or appropriate by the filmmakers or studio execs. And often the reasoning behind the decision isn't as straightforward as you'd expect, either.

Here are 15 popular movies you may not know are based on (differently-titled) books and stories:

Arrival (based on Story of Your Life by Ted Chiang)

This 2016 sci-fi film about a linguist assigned to make contact with a recently-landed alien species received overwhelmingly positive reviews from critics and was nominated for many major awards, including the Oscar for Best Picture. The 1998 novella it was based on, Ted Chiang's Story of Your Life, was also a big success, winning the Nebula Award for Best Novella among other accolades. Director Denis Villeneuve changed the title for fear that the original sounded too much like a romantic comedy.

Babe (based on The Sheep-Pig by Dick King-Smith)

Australian author Dick King-Smith's 1983 children's book about a pig who learns to herd sheep was originally called The Sheep-Pig, while the American version was retitled Babe, the Gallant Pig. The makers of the 1995 film apparently decided to tweak this already-tweaked title even further, resulting in the Babe we know and love.

Blade Runner (based on Do Androids Dream of Electric Sheep? by Philip K. Dick)

Ridley Scott's 1982 sci-fi cult classic drew most of its major plot elements from Philip K. Dick's 1968 novel Do Androids Dream of Electric Sheep? The title Blade Runner was pulled from an entirely different book (a 1974 novel by Alan E. Nourse) simply because Scott liked it better, and doesn't refer to anything in the actual film.

Carol (based on The Price of Salt by Patricia Highsmith)

Todd Haynes' critically-acclaimed 2015 period piece about a lesbian affair in the early 1950s is based on Patricia Highsmith's 1952 novel The Price of Salt. Highsmith herself changed the title to Carol when she republished the novel in 1990, and it was this title which screenwriter Phyllis Nagy selected for her own adaptation, feeling that it better encapsulated the "sort of strange, obsessive nature" of the subject matter.

Die Hard (based on Nothing Lasts Forever by Roderick Thorp)

Author Roderick Thorp originally penned Nothing Lasts Forever (1979) as a sequel to The Detective, a 1966 novel which had already been adapted into a film starring Frank Sinatra. When a septuagenarian Sinatra declined to star in the film version of Nothing Lasts Forever, the plot and title were changed to erase any connection with the earlier movie⁠—and the Die Hard franchise as we know it was born.

This 2014 sci-fi action vehicle was based on All You Need Is Kill, a light novel (a combination of prose and picture-based storytelling) by Japanese author Hiroshi Sakurazaka. Warner Bros. executives changed the English title for fear that the word "kill" would turn off potential audiences, though the Japanese release retained the original name. Meanwhile, director Doug Liman's preferred title, Live Die Repeat, was shot down by Warner and used as a tagline instead. Apparently the studio came to regret the decision, as they began to use the title and tagline interchangeably after the initial theatrical release, supposedly in an effort to draw in new viewers following the film's mediocre box office run. A sequel, Live Die Repeat and Repeat, is currently in development.

Field of Dreams (based on Shoeless Joe by W.P. Kinsella)

Screenwriter and director Phil Alden Robinson worked closely with novelist W.P. Kinsella in adapting his 1982 book Shoeless Joe for the big screen, and Robinson had no intention of changing the title until studio executives forced his hand. Ironically, Kinsella later revealed to Robinson that his own working title for the book had been The Dream Field, with the title Shoeless Joe imposed by his publisher.

Full Metal Jacket (based on The Short-Timers by Gustav Hasford)

Though director Stanley Kubrick adored Gustav Hasford's semi-autobiographical novel The Short-Timers and stuck fairly close to the source material in his adaptation, he reportedly worried that the title would make people think of part-time workers rather than marines in Vietnam. He opted for Full Metal Jacket after coming across the phrase in a gun catalog.

Australian writer Thomas Keneally published his 1982 Booker Prize-winning historical novel under the title Schindler's Ark, and that's the name most often used when referring to the book. The American edition, however, was given the slightly different title Schindler's List, and we can only assume that's the version director Steven Spielberg read as he prepared to film his Oscar-winning screen adaptation.

Though the most famous section of Frank Darabont's beloved 1994 movie still involves a strategically-placed poster of actress Rita Hayworth, it's perhaps no surprise the filmmakers chose a broader and more punchy title than the one Stephen King gave his 1982 novella.

Stand by Me (based on The Body by Stephen King)

Originally published in the same 1982 collection as Rita Hayworth and the Shawshank Redemption, Stephen King's coming-of-age novella The Body has a short, straightforward name seemingly perfect for a movie. However, Columbia Pictures deemed the title misleading, believing that (in the words of screenwriter Raynold Gideon) it "sounded like either a sex film, a bodybuilding film or another Stephen King horror film." Director Rob Reiner came up with Stand by Me, after the Ben E. King song which also plays over the film's end credits.

The Thing (based on Who Goes There? by John W. Campbell, Jr.)

The first movie adaptation of John W. Campbell's 1938 novella Who Goes There?, about a team of researchers trapped in an Antarctic base with a shape-shifting alien, was the 1951 film The Thing from Another World, sometimes shortened to The Thing. John Carpenter's 1982 version hewed much closer to the source novella than the earlier film had, but the title The Thing stuck.

Total Recall (based on "We Can Remember It for You Wholesale" by Philip K. Dick)

Almost from the beginning, the film version of Philip K. Dick's 1966 short story "We Can Remember It for You Wholesale" was destined to differ from the source material. The project passed from studio to studio and screenwriter to screenwriter for years, going through approximately 40 rewrites before it was finally adapted by director Paul Verhoeven in 1990. (David Cronenberg, who was briefly involved in the project as a screenwriter, was actually criticized by fellow writer Ron Shusett for penning "the Philip K. Dick version" rather than "Raiders of the Lost Ark Go to Mars.") Predictably the resulting, more snappily-titled film is only loosely inspired by Dick's story, and the 2012 remake doesn't credit him at all. 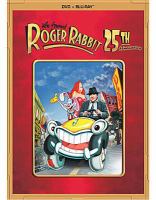 Though still not identical, the name chosen for Robert Zemeckis' 1988 comedy Who Framed Roger Rabbit is actually much closer to the original novel's title than most of the others considered by the filmmakers. Working titles for the project included Murder in Toontown, Toons, Dead Toons Don't Pay Bills, The Toontown Trial, Trouble in Toontown, and Eddie Goes to Toontown.

Though author Roald Dahl was originally on board for the movie adaptation of Charlie and the Chocolate Factory and even planned to write the script himself, he disliked the final product (which had been partially rewritten after Dahl failed to meet deadlines) enough to disown the entire film. Among other changes, he felt that the film "placed too much emphasis on Willy Wonka and not enough on Charlie." Apparently the filmmakers agreed that Wonka had become the focal point, as the title was changed to emphasize Gene Wilder's eccentric candy mogul as well.