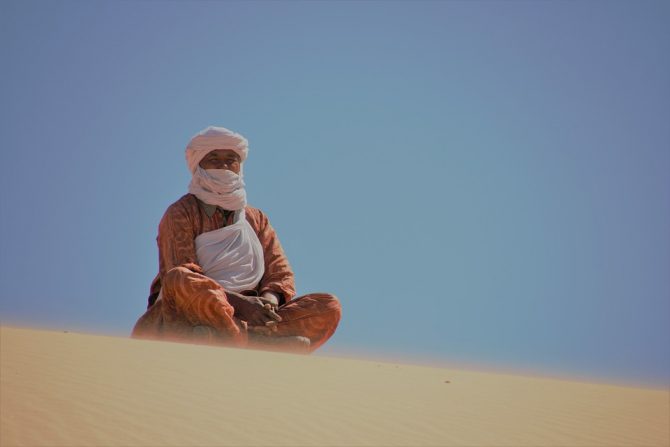 The Tuareg are a semi-nomadic people whose history stretches back at least fifteen centuries. They are a loose confederation of three million people who inhabit the most arid parts of Saharan Africa, covering portions of Mali, Algeria, Libya, Burkina Faso, and Niger. In the 1960s, many African countries sought independence from their colonial past, and the Tuaregs found themselves faced with the modern reality of arbitrary borders that carved up their ancestral homeland.

Tuareg uprisings shook Mali and Niger in the 1990s, with small groups fighting local governments and military for scarce resources and herding ground. Tenuous peace deals were brokered in both Mali and Nigeria, which the Tuareg claim the governments did not honor. In 2012 there was a short-lived attempt to create the state of Azawad in northern Mali, but the region was returned to Malian rule the following year.

It was during one of the Tuareg uprisings in the 1960s that a young musician named Ibrahim Ag Alhabib witnessed his father, a Tuareg rebel, executed by the Malian government. Soon after, Ag Alhabib saw an American western film and built a guitar out of a plastic water can, a stick, and some fishing wire. In the late 1970s, he and other Tuareg rebels formed a band that combined local wedding music with Western guitarists like Jimmy Page, Mark Knopfler, and Jimi Hendrix. They originally had no name, but were called Kei Tinariwen, which meant “The Desert Boys” in Tamashek. The group lived nomadically for years, moving from Algeria to Libya. While in Libya, they received military training as part of al-Gaddafi’s dream of forming a Saharan military regiment.

In the late 1990s, they came to the attention of a group of French world musicians. They soon gained international press and held festivals in the desert featuring groups from Western Africa and Europe. Their breakthrough came in 2010 where they represented Algeria in the opening of the 2010 FIFA World Cup.

Meanwhile, Nigerien guitarist Goumar “Bombino” Almoctar and his friends were listening to the same Western influences and incorporating them into their wedding band Group Bombino. Similar to Tinariwen, the group moved around the Tuareg region, playing in the Nigerien city of Agadez, as well as Burkina Faso while Bombino was in exile.

In 2013, the group worked with Dan Auerbach, guitarist for the band The Black Keys, to record their breakthrough record Nomad. They received international honors, and Bombino was the first Nigerien to be nominated for a Grammy award.

The two groups have done much to bring their music and their story to the world. They’ve toured around the globe and have been able to share their story with international audiences. Their music -- a loose, free-wheeling combination of traditional melodies and Western styles -- has been well-received and evokes not only the sandy stretches of the Sahara, but also their struggle as people to find stability and home.