Anthony Bourdain, a world known chef, had many TV food shows including one that took him around the world. A lesser known fact about him is that he co-wrote a comic. You can remember this chef, author, and celebrity personality with these titles from our digital collections. 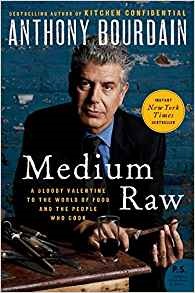 Review provided by OverDrive
Medium Raw marks the return of the inimitable Anthony Bourdain, author of the blockbuster bestseller Kitchen Confidential and three-time Emmy Award-nominated host of No Reservations on TV's Travel Channel. Bourdain calls his book, "A Bloody Valentine to the World of Food and the People Who Cook," and he is at his entertaining best as he takes aim at some of the biggest names in the foodie world, including David Chang, Alice Waters, the Top Chef winners and losers, and many more. If Hunter S. Thompson had written a book about the restaurant business, it could have been Medium Raw. 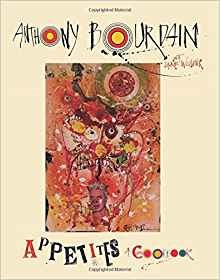 Review provided by OverDrive
Appetites, his first cookbook in more than ten years, boils down forty-plus years of professional cooking and globe-trotting to a tight repertoire of personal favorites—dishes that everyone should (at least in Mr. Bourdain's opinion) know how to cook. Once the supposed "bad boy" of cooking, Mr. Bourdain has, in recent years, become the father of a little girl—a role he has embraced with enthusiasm. After years of traveling more than 200 days a year, he now enjoys entertaining at home. Years of prep lists and the hyper-organization necessary for a restaurant kitchen, however, have caused him, in his words, to have "morphed into a psychotic, anally retentive, bad-tempered Ina Garten." 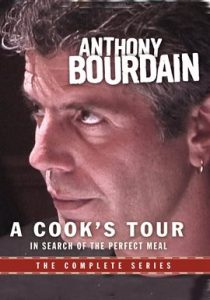 Review provided by Hoopla
Anthony travels to Tokyo, where he begins in the Tsujiki market and then is introduced to techniques in preparing edomae sushi. He also learns the diets of Sumo wrestlers. 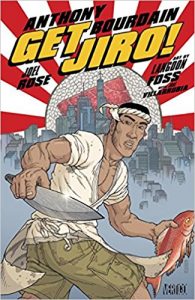 Review provided by Hoopla
In a not-too-distant future L.A. where master chefs rule the town like crime lords and people literally kill for a seat at the best restaurants, a bloody culinary war is raging.On one side, the Internationalists, who blend foods from all over the world into exotic delights. On the other, the 'Vertical Farm,' who prepare nothing but organic, vegetarian, macrobiotic dishes. Into this maelstrom steps Jiro, a renegade and ruthless sushi chef, known to decapitate patrons who dare request a California Roll, or who stir wasabi into their soy sauce. Both sides want Jiro to join their factions. Jiro, however has bigger ideas, and in the end, no chef may be left alive! Anthony Bourdain, top chef, acclaimed writer (Kitchen Confidential, Medium Raw) and star of the hit travel show, No Reservations, co-writes with Joel Rose (Kill Kill Faster Faster, The Blackest Bird) this stylized send-up of food culture and society, with detailed and dynamic art by Langdon Foss.