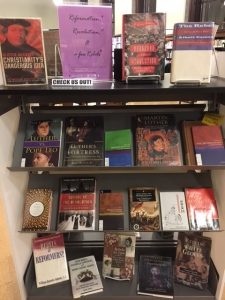 Click here for a full list of what was on display, and read on to learn a little more about one book from each of the three categories:

Reformation. There are many good books on the topic of Martin Luther, what prompted him to (purportedly) nail his 95 theses to the door of All Saints' Church in Wittenberg, the Reformation that his actions set in motion, and its lasting impact on the Catholic Church and Christianity as a whole, and several of them are available at SLPL. A recent arrival at Central, Luther Vs. Pope Leo (A Conversation in Purgatory) by Paul Hinlicky, gives a new spin on the topic just in time for this momentous anniversary. Described by the author in the preface as an "ecumenical fantasy," in the book begins with Martin Luther and Pope Leo X, the leader of the Church when Luther started causing trouble, waking from death to find themselves roommates in purgatory. In the room with them is a document that proclaims, in part, "Leo, you have without justice pronounced your brother in Christ a heretic and condemned him to a painful and unjust death. Martin, you have without justice pronounced your brother in Christ an antichrist and damned him, as if you were the Last Judge over him." The book describes their theological wranglings as they begrudgingly attempt to reconcile so that they might "pass into the presence of the holy God."

Revolution. Helen Rappaport's Caught in the Revolution tells the story of the Russian Revolution from the point of view of foreigners who were present in Petrograd (previously and currently St. Petersburg and Leningrad from 1924-1991) in 1917 and chronicled the tumultuous events in letters home, in diaries, and in memoirs, many of which had not been previously published. Among the dozens listed in the "Glossary of Eyewitnesses" at the beginning of the book:

"By confining herself to foreigners in Russia’s capital, Rappaport takes a necessarily narrow slice of revolutionary history. But the story these witnesses tell is endlessly fascinating." (New York Times Book Review, Feb. 24, 2017).

Rebels. The third shelf of the "3 Rs" display contained a variety of books about (if the titles are to be believed) rebels, including Miriam Horn's Rebels in White Gloves - Coming of Age with Hillary's Class - Wellesley '69. Written in 1999 for the 30th anniversary of the Class of '69, the book obviously has not caught up with the latest in Hillary Clinton's saga. Looking back from 2017, some might read a bit wistfully that one Wellesley grad told another, with regard to their classmate Hillary Rodham, "Take a good look at her. She will probably be the president of the United States one day." (p. 47) Along the same lines, the New York Times Book Review recounts that "At Yale Law School, some of her classmates thought Hillary Rodham might be the first woman to be elected President. Instead, she married the man who would be President." As interesting as it no doubt was to look back at the 1969 graduates with 30 years' perspective, it is equally interesting to look back both at the group of women, as profiled in the book, and the 1999 telling of their stories from another 18 years out. 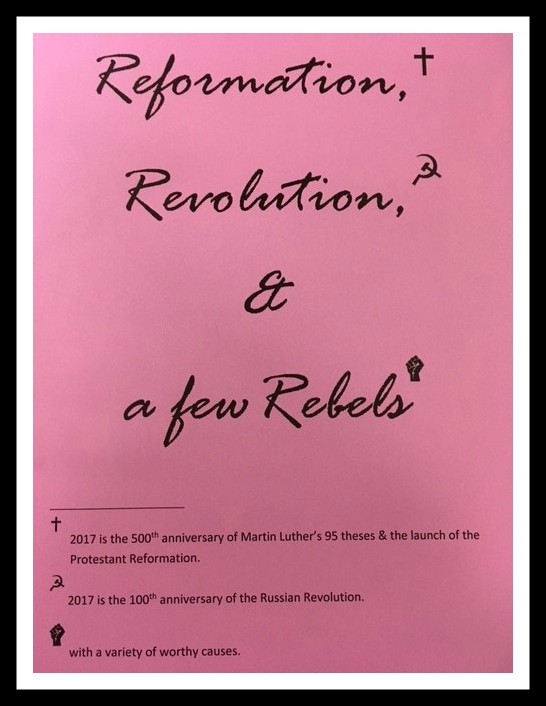