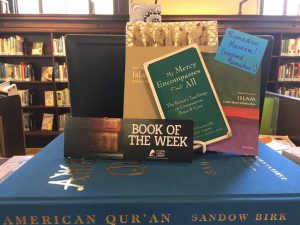 With the sighting of the new moon earlier this month (during the ninth month of the Islamic lunar calendar), the holy month of Ramadan began, with a focus on fasting and prayer for those who observe. Ramadan commemorates the revelation by God to the Prophet Muhammad of the first chapters of the Qur'an. St. Louis Public Library has copies of the Qur'an in English and/or Arabic available to be checked out and in our reference collection (to be enjoyed here at Central), as well as many books about the Islamic faith, the Prophet Muhammad, Muslim traditions, and what it's like to be a Muslim in the United States. For a sampling of what you might find, explore this list that we've compiled, or browse the SLPL catalog (or our app!).

Among the books on offer are some impressive specimens, both in terms of size and content. American Qur'an is a contemporary take on the illuminated Qur'an, illustrated and hand-lettered by artist Sandow Birk with scenes from everyday American life. As you see in the picture above where it served as the base for our "Book of the Week" display, it is a big book, but it is available to be checked out to peruse at home at your leisure. The Sacred Trusts is another large book, this one about the Topkapi Palace Museum in Istanbul and the "sacred relics" the museum holds, including items said to have belonged to the prophets Abraham, Joseph, and Moses. The doors pictured below lead to the Throne Room where the sultans of the Ottoman Empire resided and received state visitors; the inscription above the doorway reads "Peace be upon you, O Messenger of God" (see p. 23 of The Sacred Trusts for more information). This one is a reference book which we invite you to enjoy here at Central Library.

In addition to the many books available to enjoy here or at home, St. Louis Public Library provides access to the Oxford Islamic Studies Online database through the SLPL website ("Digital Content" then "A-Z Resources" then "O" for "Oxford..."). The database provides a wealth of information, including several entries on Ramadan:

Ramadan, the ninth month of the Islamic lunar calendar (the hijrah calendar), is the only month specifically mentioned in the Qurʿān. The name is drawn from the root word r-m-d, which refers to heat of summer. It was in the second year of hijrah (the Muslim Era), prior to the battle of Badr, that believers, men and women, were commanded to fast from dawn to dusk for the whole month.

and still more information about the Tokapi Palace (or "saray") - this from the Oxford Encyclopedia of Islam and Women:

The primary residence of the rulers of the Ottoman Empire from 1465 until 1856, Topkapi Saray consisted of ten domed buildings, including the Imperial Harem, which was the women's quarters for members of the ruling family and their staff. The palace was built in Istanbul by Mehmet II between 1459 and 1465 as a series of interlocking complexes with their own courtyards. Within the central part of the main complex, which is located in the west of the palace grounds, to the southwest of the Third Court, lived the many women who constituted the “harem,” which at its peak numbered some one thousand women. 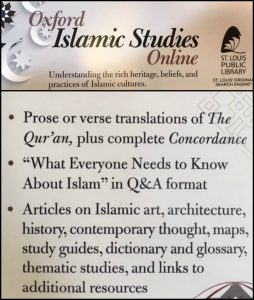 Insha Allah: If God wills. Used in statements of what one hopes will happen in the future, reminding the believer that nothing happens unless God wills it and that only what God wills will happen. Demonstrates the belief that God's will supersedes human will. Common phrase in everyday speech.

(from the Oxford Dictionary of Islam accessed via the Oxford Islamic Studies Online database.)