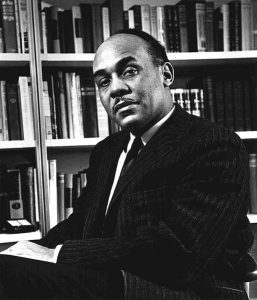 Some may know the title, “The Invisible Man”, because of the film classic based on the H.G. Wells book of the same title. The story tells of a man who discovers a formula that can turn anyone who consumes it invisible. But there is a terrible side-affect: A terrible and unchecked madness and growth in ego, which is ultimately the Invisible Man’s undoing.

But there is another Invisible Man, a man made see-through not by his own hands or the miracles of science, but of society.

Ralph Ellison’s Invisible Man was published in 1952, but it is said that it had begun in a barn seven years ago. After writing to his friend, Richard Wright, about his disillusionment with the Communist party, Ellison began work on a story that would respond to the party’s betrayal of their ideals and motives, especially in regards to African Americans. 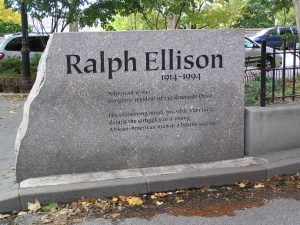 Invisible Man tells the story of an unnamed black man who says he has become invisible to the rest of the world because of the color of his skin. His invisibility is not, “…exactly a matter of a bio-chemical accident to [my] epidermis. That invisibility to which [I] refer occurs because of a peculiar disposition of the eyes of those with whom [I] come in contact” (Ellison, “Prologue”). His invisibility is societal due to those around him ignoring who he is and what he wants in favor of a prescribed narrative that he is not in control of. 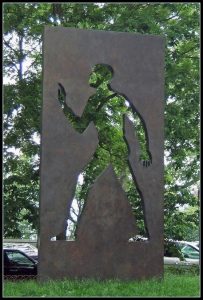 The narration begins in a room, which is aptly described as “a hole in the ground, as you will. Now don't jump to the conclusion that because I call my home a ‘hole’ it is damp and cold like a grave; there are cold holes and warm holes. Mine is a warm hole. And remember, a bear retires to his hole for the winter and lives until spring; then he comes strolling out like the Easter chick breaking from its shell. I say all this to assure you that it is incorrect to assume that, because I'm invisible and live in a hole, I am dead. I am neither dead nor in a state of suspended animation. Call me Jack-the-Bear, for I am in a state of hibernation.”

Ellison’s invisible man claims power in his invisibility, but also claims that power comes with a price. 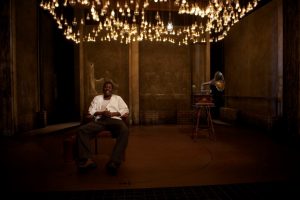 In order to be noticed, he is seen in the dark, and often only during a violent encounter, such as the incident recounted in the Prologue: “One night I accidentally bumped into a man, and perhaps because of the near darkness he saw me and called me an insulting name. I sprang at him, seized his coat lapels and demanded that he apologize…he looked insolently out of his blue eyes and cursed me, his breathe hot in my face as he struggled….”

The invisible man says he is invisible because people refuse to see him, and therefore, he explains, he gives up his life and those luxuries that come with it, as well as the prices that come with such luxuries: “I gave up all of that, along with my apartment, and my old way of life: That way based upon the fallacious assumption that I, like other men, was visible.” 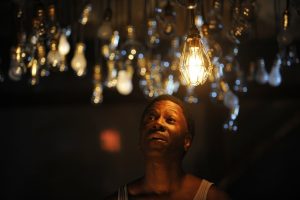 From the power he finds in being unseen, it also can be a burden on him, to be invisible is to be isolated. His hole that he describes as “warm and safe” is also well lit by hundreds of bulbs and stolen electricity from Monopolated Light& Power: “…I love light. Perhaps you’ll think it strange that an invisible man should need light, desire light, love light. But it is exactly because I am invisible. Light confirms my reality, gives birth to my form.” It is interesting that he does not pay for electricity, something that fuels the light that gives him form, but it is also rational. Why pay for something that is considered a luxury for someone—something that is considered important to people—when you aren’t even considered a person? He must steal the thing that gives him life—that gives him shape—in order that he exist.

In its essence, Invisible Man is the arc of a man, realizing his voice and his worth, but also that he is invisible. It’s not the story of how one became invisible, but how someone discovered they were invisible the whole time:

“I was looking for myself and asking everyone except myself questions which I, and only I, could answer. It took me a long time and much painful boomeranging of my expectations to achieve a realization everyone else appears to have been born with: That I am nobody but myself.”

It is also a story that asks a question: When a man is unseen, can he change anything? Should he change anything, is it even possible, or is it a waste to care so much about the injustices of remaining invisible?

“So why do I write, torturing myself to put it down? Because in spite of myself I’ve learned some things. Without the possibility of action, all knowledge comes to one labeled ‘file and forget’ and I can neither file nor forget. Nor will certain ideas forget me; they keep filing away at my lethargy, my complacency.”

It is also a question of action. Should or even can it be taken an invisible man? To this, we get the response: “Please, a definition: A hibernation is a covert preparation for a more overt action.”

The legacies of Ellison prove that action will come in due time, and the invisible are now being seen. Check out this list of his works and essays, as well as a couple of guides to his work, to better understand what Ellison was writing about, and the world that saw nothing but vapor. 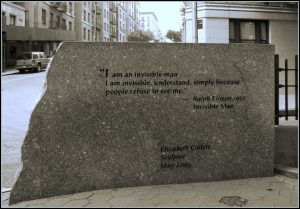 Ralph Ellison, The Art of Fiction, from The Paris Review

Ralph Ellison, from the Library of Congress