Prohibition was established through two acts of legislation. The first was the Eighteenth Amendment and the second was the Volstead Act. 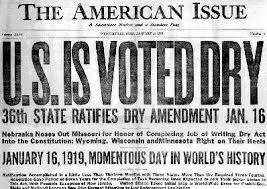 The 18th Amendment was proposed by the U.S. Senate in 1917 after strong lobbying from the Anti-Saloon League and Women’s Christian Temperance Union. After passing the Senate and House it was sent to the states to be ratified. There the amendment would need 36 of the then 48 states to accept the amendment. After just two years Nebraska became the 36th state to ratify and the amendment was added to the Constitution, but would not go into effect until one year later in 1920. Though there were no penalties listed in the amendment, the “manufacture, sale, or transportation of intoxicating liquors” was prohibited.

To provide enforcement for the amendment the Volstead Act (National Prohibition Act), named after Minnesota Rep. Andrew Volstead, was created to specify what intoxicating liquors were and add penalties for violating the new amendment. To the surprise of many the Volstead Act defined intoxicating liquors as having an alcohol content of .5% or more. This upset some Prohibition supporters who thought wines and beers would remain legal. The Act cleared Congress, but was vetoed by President Woodrow Wilson. Congress then voted again and overrode his veto on October 28th, 1919. 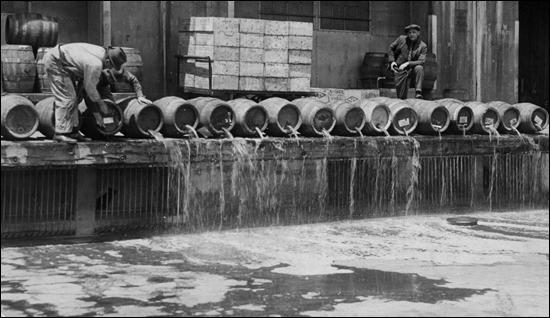 Prohibition officially started on January 17th, 1920, and at first it seemed to be working: consumption dropped, arrests for drunkenness sharply declined and illegal alcohol was just too expensive for most people. There were some unusual caveats to enforcement:  drinking intoxicating liquors was still legal and some people had stockpiled large amounts before Jan. 17th. A notable example was President Harding who moved $1800 worth of liquor with him to the White House after taking office.  Another oddity was that doctors could write prescriptions for alcohol, redeemable for one pint of liquor every ten days, for ailments varying from headaches to the more general ailment of “debility.”

Despite early success, the Amendment slowly started to unravel. Bootlegging, the illegal production and distribution of alcohol, quickly became a major problem. With the bootleggers came more violent crime for which there were neither enough federal or local authorities to deal with.  Public mood was also shifting back away from the idea of Prohibition. In 1933 the 18th Amendment was repealed by the 21st Amendment, and with it went the Volstead Act, thus ending Prohibition.