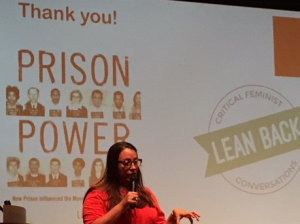 On July 10, St. Louis Public Library welcomed Dr. Lisa Corrigan, who discussed her book, Prison Power: How Prison Politics Influenced the Movement for Black Liberation (University Press of Mississippi, 2016), recipient of the 2017 Diamond Anniversary Book Award and the 2017 African American Communication and Culture Division Outstanding Book Award both from the National Communication Association, with a vibrant and engaged group in Central's Auditorium. Dr. Corrigan's book traces the transformation from Civil Rights to Black Liberation by focusing on key figures in those movements and their writings, beginning with Dr. Martin Luther King, Jr. and his "Letter from Birmingham Jail," then pivoting to the writings of H.Rap Brown, Mumia Abu-Jamal, Assata Shakur, & others, and their use of Black power rhetoric.

In anticipation of Dr. Corrigan's talk we pulled together books referenced in and/or relevant to Prison Power and also took the opportunity to add a few more books to the Library's collection, and of course we created a list so the display would live on virtually even after the books are redistributed to their homes on the shelves. 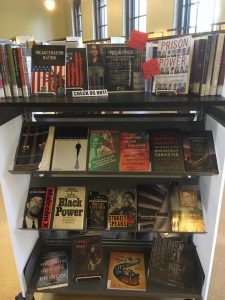 Dr. Corrigan's next project is a book called Black Feelings that "charts how politics creates feelings and how feelings create politics in an anti-black world" - after enjoying her Prison Power talk so much, we have an oral commitment from Lisa to return to discuss her new book once it is out. In the meantime, you can hear her exploring another of her areas of expertise, gender studies, via Lean Back: Critical Feminist Conversations, a podcast she co-hosts with Laura Weiderhaft that was named the top podcast in Arkansas and one of the top thirty-five podcasts in the country by Paste magazine.