Chefs around the world can agree that pigs are the most versatile animal meat. Today pork has moved more into the fine dining restaurants where it can be seen as a roast loin of pork or a pork belly taco.

Our domestic pigs are descended from the European wild boar, Sus scrofa, and the Asiatic wild boar, Sus vitattus or S. indicus. Drawings of wild boars have been found in prehistoric caves such as Lascaux. Apicus, a Roman cook book author, of the book titles De Re Coquinaria, wrote in the late third century A.D. several recipes for pork. Romans loved bacon and ham. Stuffed pork roulades in sweet wine, boiled pork with greens, are just a few of the dinners offered to Romans.

According to Aidells and Kelly (1998):“At a feast thrown by Trimalchio, the eptome of a nouveau riche for Petronius, 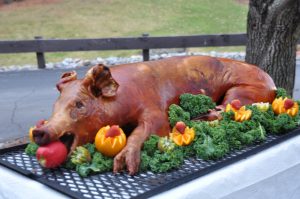 the main course was a huge roast sow surrounded by marzipan piglets. The carver discovered, to his horror, that the pig seemed not to have been gutted, and the feast seemed to be spoiled, with the chef in disgrace. When the pig was cut open, however, whole sausages, blood puddings, small roast birds, and other delicacies tumbled out, to the surprise and delight of the diners. The trick was described earlier by Athenaeus’ star chef: the pig is killed and bled by a small cut under the shoulder. The intestines are drawn out through the mouth, washed well with wine and spices, and then replaced. Roast birds, cooked sausages, spices, and gravy are stuffed in via the mouth, and the pig is then roasted whole for the big surprise.” Asian cuisines have used pork for many ages – fresh, cured, braised, poached, or stir-fried. Europeans have salted and smoked pigs. The following festivals in Europe celebrated with eating the whole hog: the German Schlactfest, the Spanish Matanzas, and the French boucherie. Pigs were brought to America from Europe by explorers. Christopher Columbus had brought eight pigs with him on his second voyage in 1493. Cortes took a pig with him to Mexico. De Soto in 1539, brought 13 sows and 2 boars to Florida. Soon they were spread further west and became the basis of the semi-wild razorbacks. These pigs became a great source of food for those in the American South. Pigs that were introduced to the Massachusetts Bay Colony and in the Dutch colonies in New Amsterdam soon created a thriving industry – salt pork – a Yankee specialty. It is used in what we know as Boston Baked Beans. By being fed Indian corn, pigs were fattened, then slaughtered and exported as salted or barreled pork. They were traded to the Caribbean. This product became famous in the Triangle Trade where American goods were exchanged in the West Indies for molasses and rum, which in turn were traded in West Africa for slaves that in turn were sold to planters in the Caribbean and the American South. Today, as America has grown, the pork industry has too. Boston, New York, and Philadelphia were ports that became processing centers for salt pork that was exported to the Caribbean and England. Cincinnati, as well as Chicago became major centers of pork processing. Porkopolis became the nickname of Cincinnati where by 1860, over 400,000 pigs were slaughtered annually.

Pigs are known to bond strongly with other animals. They thrive on the company of other animals. Pigs have a never-ending drive to root, which means searching through dirt with their snouts for burrowed roots and nuts. However, pigs are known for their superb meat. If you raise your own pigs, you will truly know how delicious pork can taste.
Pigs just love to eat green fodder. If you can find pig farmers who grow these crops, “just” for their pigs to eat and are willing to part with them, you have just found a gem. Farmers may also mix their own feed, including a balanced diet of rolled oats, barley, corn, dried beets, dried peas, or other legumes. All in all, a pig that is allowed to be happy with their favorite foods to eat, plus space to run around, will taste indefinitely better than any other pig.
Now let’s talk about eating pigs.
The Belly: When it comes to a flavorful taste of pork, you can be guaranteed the underside of a pig, the belly, will be tasty – why, because it is fairly fatty. It can be rubbed with salt, scored, and slow-roasted to produce a nice crispy skin. Pork belly tacos are becoming popular with upscale restaurants. Bacon comes from the belly, back and loin of the pig. It is cured by salting, and/or smoking. Streaky bacon comes from the belly and is quite fatty. Middle bacon has less fat and thus, less streaky. Back bacon has less fat. Unsmoked bacon is known as “green” bacon.
The Blade: This cut is from the shoulder /top of the front leg. They are usually roasted on the bone, or can be cut into steaks or chops and then braised. The French grill thin blade steaks and call them Grillades.
Chops: We grew up with breaded pork chops. I would dust them lightly with seasoned flour, then fry them. As I gained more experience with various cultures, I began using sumac as a complimentary spice. In Eastern Europe, often sauerkraut is served with pork chops. In Spain loin chops are called chuletas and costillas are pork chops or spare ribs.
Diced Pork: This meat is cut from the shoulder, is quite tough, and is best used in slow-cooked meals. Rumanians make a sour soup (Ciorba) that is prepared by letting the pork simmer with onions and spices.
Fillet or Tenderloin: These lean pieces of pork are taken from the hind part of the loin. They are perfect for roasting or stuffing. I enjoy rolling them in a spice mixture and roasting them. Again, I am suggesting using sumac to be one of the spices. Rubbing the fillet or tenderloin with olive oil will help keep your spice mixture from forming a thick crust.
Leg: Rather than eating my preferred leg of lamb, periodically I will choose a leg of pork for dinner. I enjoy this cut because it is excellent for roasting. This cut is lean and tender. I have prepared it rolled and stuffed. It is always a pleasure to surprise my dinner guests with flavours that burst out.
Loin: This is a prime lean cut that is suitable for roasting. If traveling to Italy or Spain, it is often slow cooked in milk.
Rack of Pork: This is the same cut as a loin of pork, except it still has the rib bones which are “frenched”, meaning the extra meat is trimmed. A crown roast of pork is made up of two loins tied together to form a ring.
Shoulder: Shoulder steaks are best slowly braised. They tend to be quite fatty, thus, by roasting the meat, it becomes tender and juicy. In Poland, the pork shoulder is smoked, then used in their bigos, or sauerkraut stew.
Spare Ribs: Who lives in Saint Louis and has not had spare ribs? I am sure there are many diets that do not include this meat, however, for those who do include pork, smoked spare ribs are a yearly party pleaser. They are often marinated in sweet and spicy mixtures.
Pork Steaks: These delicious steaks are cut from the loin, leg, or shoulder. They are boneless, tender, and juicy. Grilling, frying, or barbequing is usually what is done with pork steaks.