If you’re visiting Central Library this summer to see Working in America, SLPL’s current exhibit in the Great Hall, we encourage you to head up to the 3rd floor afterward to view a selection of miniature books now on display in Rare Books & Manuscripts. 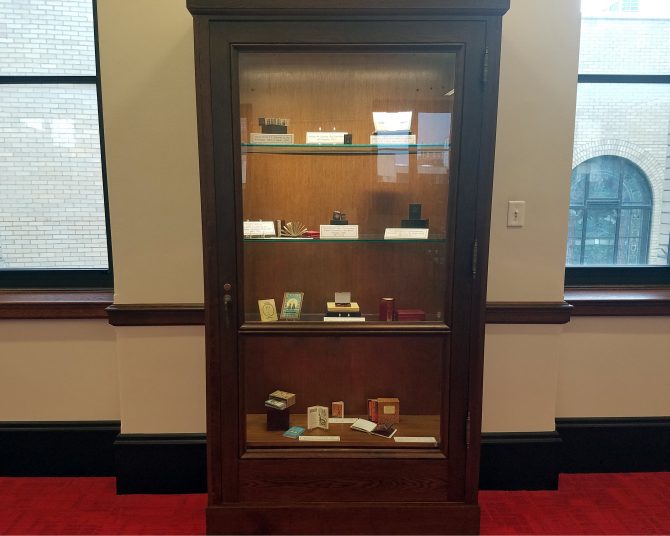 Fascinating to folks of all ages, miniature books are commonly defined as measuring a maximum of three inches in height. Because of their portability and novelty, tiny books are as old as the written word itself. Miniature examples of cuneiform tablets, scrolls, and illuminated manuscripts were created in antiquity and medieval times.

With the advent of the printing press and movable type, small bibles, dictionaries, and children’s readers were among those produced in large numbers. In choosing the medley of titles to showcase, we’ve attempted to demonstrate the variety in our collection – from 19th century ABC books with woodcut illustrations to a 21st century "micro" miniature less than a millimeter in size.

The latter, among other titles in our collection, was a gift from the late Julian I. Edison, former chairman of the Edison Brothers’ Stores. Mr. Edison, who served on the St. Louis Public Library Foundation Board of Trustees for many years, was an enthusiastic and expert collector of miniature books.

In 2007, Mr. Edison co-authored Miniature Books: 4,000 Years of Tiny Treasures with Anne C. Bromer. The publication of the comprehensive, beautifully illustrated volume coincided with a major exhibition of miniature books at New York’s Grolier Club. The Deluxe Edition, limited to 250 copies signed by the authors, fittingly includes a perfect miniature facsimile of itself!