Remember the servicemen who were killed in the surprise attack on Pearl Harbor with these titles from our digital collections. 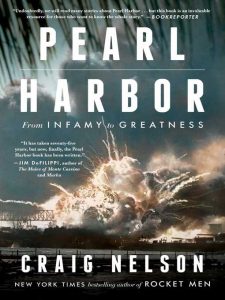 Review provided by OverDrive
The America we live in today was born, not on July 4, 1776, but on December 7, 1941, when an armada of 354 Japanese warplanes supported by aircraft carriers, destroyers, and midget submarines suddenly and savagely attacked the United States, killing 2,403 men—and forced America's entry into World War II. Pearl Harbor: From Infamy to Greatness follows the sailors, soldiers, pilots, diplomats, admirals, generals, emperor, and president as they engineer, fight, and react to this stunningly dramatic moment in world history. 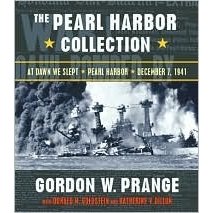 Review provided by Hoopla
The year 2001 marks the 60th anniversary of the United States' entry into World War IIan event precipitated by Japan's devastating surprise attack on Pearl Harbor. At Dawn We Slept is a masterful work, 37 years in the making, that tells the story of Pearl Harbor from both the American and Japanese perspectives. It's a crucial piece of history - and a gripping, richly textured human drama as well. Pearl Harbor: The Verdict of History places the attack in a larger context via a close and compelling examination of its precursors and consequences. Dec.7, 1941 is the culmination of Prange's brilliant study of Pearl Harbor: a riveting, moment-by-moment account that captures the diplomatic intrigue, the brutal combat, and the human beings - on both sides of the battle - whose lives were irrevocably altered on that fateful morning. Absorbing, enlightening, and unstintingly dramatic, this commemorative boxed set is as relevant to those who remember what FDR called "a day that will live in infamy" as it is to younger people just learning about this vital chapter in American history. 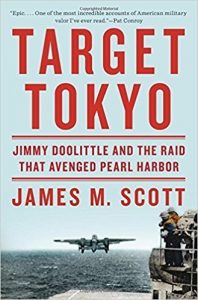 Preview provided by OverDrive
In December 1941, as American forces tallied the dead at Pearl Harbor, President Franklin Roosevelt gathered with his senior military counselors to plan an ambitious counterstrike against the heart of the Japanese Empire: Tokyo. Four months later, on April 18, 1942, sixteen U.S. Army bombers under the command of daredevil pilot Jimmy Doolittle lifted off from the deck of the USS Hornet on a one-way mission to pummel the enemy's factories, refineries, and dockyards and then escape to Free China. For Roosevelt, the raid was a propaganda victory, a potent salve to heal a wounded nation. In Japan, outraged over the deaths of innocent civilians—including children—military leaders launched an ill-fated attempt to seize Midway that would turn the tide of the war. But it was the Chinese who suffered the worst, victims of a retaliatory campaign by the Japanese Army that claimed an estimated 250,000 lives and saw families drowned in wells, entire towns burned, and communities devastated by bacteriological warfare. 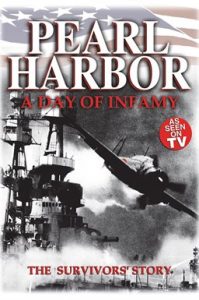 Review provided by Hoopla
On the morning of December 7, 1941, Imperial Japanese forces made a surprise attack on the American forces based at Pearl Harbor, Hawaii. In an instant, war began for America. In exclusive interviews, survivors of the battle share their memories, recalling the terror, confusion and bravery of those who suddenly found the peaceful Hawaiian paradise shattered by bombs and bullets wreaking death and devastation all around them. Soldiers, sailors, pilots and civilians give their riveting personal eyewitness testimony recounting the heroism and tragedy of that fateful day. Historic archival films, including recently discovered color footage, plus dramatic recreations highlight this presentation, which also deals with some of the controversial questions surrounding the attack. This is a tale of shock, the outrage and the bitter resolution of those who lived through the raid. Relive that incredible day through the memories of those who survived and whose experiences put you there in the midst of the catastrophic attack.