The military attack on Pearl Harbor took place on December 7, 1941. Learn more about this strike and the impact it had on United State's involvement in World War II with these titles from our digital collections. 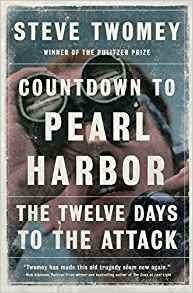 Review provided by OverDrive
In a small office at Pearl Harbor, overlooking the battleships, the commander of the Pacific Fleet tried to assess whether the threat was real. His intelligence had lost track of Japan's biggest aircraft carriers, but assumed they were resting in a port far away. Besides, the admiral thought Pearl was too shallow for torpedoes; he never even put up a barrier. As he fretted, a Japanese spy was counting warships in the harbor and reporting to Tokyo. 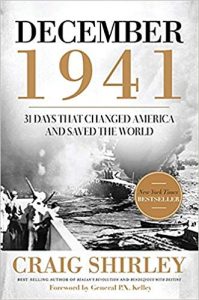 Review provided by Hoopla
In the days before the attack on Pearl Harbor, eyes in America were focused on the war in Europe or distracted by the elevated mood sweeping the country in the final days of the Great Depression. But when planes dropped out of a clear blue sky and bombed the American naval base and aerial targets in Hawaii, all of that changed. December 1941 takes readers into the moment-by-moment ordeal of a nation waking to war. Best-selling author Craig Shirley celebrates the American spirit while reconstructing the events that called it to shine with rare and piercing light. By turns nostalgic and critical, he puts readers on the ground in the stir and the thick of the action. Relying on daily news reports from around the country and recently declassified government papers, Shirley sheds light on the crucial diplomatic exchanges leading up to the attack, the policies on internment of Japanese living in the U.S. after the assault, and the near-total overhaul of the U.S. economy for war. Shirley paints a compelling portrait of pre-war American culture: the fashion, the celebrities, the pastimes. And his portrait of America at war is just as vivid: heroism, self-sacrifice, mass military enlistments, national unity and resolve, and the prodigious talents of Hollywood and Tin Pan Alley aimed at the Axis Powers, as well as the more troubling price-controls and rationing, federal economic takeover, and censorship. 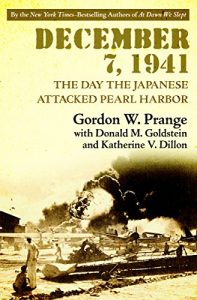 Review provided by Hoopla
A minute-by-minute account of the morning that changed America forever When dawn broke over Hawaii on December 7, 1941, no one suspected that America was only minutes from war. By nightfall, the naval base at Pearl Harbor was a smoldering ruin, and over 2,000 Americans lay dead. December 7, 1941 gives a captivating and immersive real-time account of that fateful morning. In or out of uniform, every witness responded differently when the first Japanese bombs began to fall. A chaplain fled his post and spent a week in hiding, while mess hall workers seized a machine gun and began returning fire. Some officers were taken unawares, while others responded valiantly, rallying their men to fight back and in some cases sacrificing their lives. Built around eyewitness accounts, this book provides an unprecedented glimpse of how it felt to be at Pearl Harbor on the day that would live in infamy.