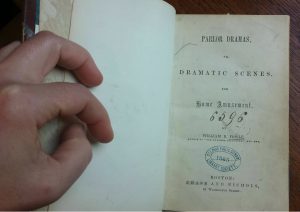 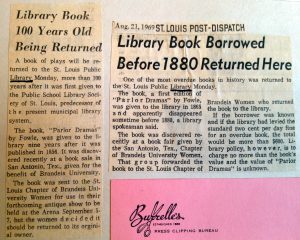 Let me see here, I thought, as my fingers examined the shelf of well-worn titles. Aided by an imaginary sleuthing cap, I’d taken it upon myself to prowl the lengthy 3M level of Central Library’s stacks. I was on a mission. 793.1 Fitzgerald, 793.1 Flexner, 793.1 Fogerty… sure enough 793.1 Fowle. There it was, Parlor Dramas, or, Dramatic Scenes, for Home Amusement, the book I’d first read about in clippings from the Library’s 1969-1970 Scrapbook. Neatly tucked alongside its similarly Dewey classified brothers and sisters, William Bentley Fowle’s 1856 collection of amateur plays, half leather bound over marbled boards, was home where it belonged. That’s neat.

One would never suspect that Parlor Dramas’ whereabouts were unknown for 90 years. That’s an entire lifetime. And now, the newspaper articles recalling its unlikely return to St. Louis Public Library were written four and a half decades ago. Back in 1969, Parlor Dramas was discovered in San Antonio, Texas at a book fair held by the local chapter of Brandeis University National Women’s Committee. It was forwarded to Mrs. Samuel Kohn, the chairwoman of the St. Louis chapter, to be included at an upcoming antique show held at the old Arena annex on Oakland. Kohn decided instead to return it to our collection.

From what I can gather after sifting through the SLPL Archives, which we keep up here in Special Collections, Parlor Dramas went missing sometime before 1880. It is listed in the 1870 catalog just below an earlier Fowle book, the breathlessly baptized The Hundred Dialogues, New and Original; Designed for Reading and Exhibition in Schools, Academies, and Private Circles. It seems Hundred Dialogues disappeared off our shelves, too. I found a handwritten missing list from 1877, mistakenly referring to it as “500 Dialogues.” But that collection never made a headline-making comeback.

The archives, including the carefully assembled scrapbooks, date back to the beginnings of the library in 1865, when it was known as the Public School Library Society of St. Louis. We were originally a subscription library open only to paying members. Since joining Special Collections two years ago, I’ve regularly relied on and reveled in this treasury of manuscripts, correspondence, board meeting notes, etc. to answer reference questions and assist visiting researchers. I found myself especially taken with materials relating to former library head Arthur Bostwick’s seven week trip to China in 1925. Sent by the American Library Association to promote public library development, Bostwick wrote affectionate daily letters to his wife Lucy, seemingly on whatever bits of paper he could find. A Chinese scholar I assisted earlier this year expressed to me just how important Bostwick’s tour was to the modernization of libraries in China. Trip… tour… whoops, back to Parlor Dramas!

I spent a few days reading the plays in Parlor Dramas and researching the pastime itself. Entertaining guests by putting on scripted productions with friends and family as actors was a popular Victorian Age form of home entertainment in both Great Britain and the United States. The contrived plots were often satirical spins on then-current events and characters were generally stereotypes. The affectations of social classes were treated with humor and scandal was common.

The soap opera-like tale “The Fugitive Slave” involves an ‘orphaned’ baby girl born into slavery, but raised by a Quaker family as their own daughter. However, secrets can’t be kept forever and on Marie Eugenie’s 18th birthday the inexplicable truth is revealed to all with oddly joyous results. Another play, “The Tea Party,” features stuffy society women, one of whom is seeking a domestic servant. Enter the unrefined Elsie McSnooksy, a new arrival from Ireland “seeking a place.” She’s not quite the “American girl” that Mrs. Hyson has in mind to serve “tay” at her gatherings.

I’ve thought about how out of place Parlor Games must have been after its magical mystery tour. It was now the very un-Victorian summer of 1969. Woodstock, the Stonewall Riots, and Apollo 11 were big stories on people’s lips and Puzo’s The Godfather and Vonnegut’s Slaughterhouse Five were on the library’s shelves. At least it made the paper.

I’m not sure why it meant so much to me that I found the darn book in its proper place. Items must come and go. We can’t keep everything. Am I woozy from the sentimental nature of the holidays and the approaching New Year? Did the scrapbook from 1969 (the year I was born) evoke these emotions of nostalgia? I recently learned that Immanuel Kant, a major figure in modern philosophy, never journeyed from his hometown of Konigsberg, Prussia. Still, he’s remembered as one of history’s great thinkers. But, ringing in my head is a line from Whitman’s Song of Myself, “I tramp a perpetual journey.” I do know I would have been sorely disappointed had I not found Parlor Dramas.

But, it was home and has been for quite some time, and that’s neat.