So, to begin 2014 with an embarrassing confession, I had never until very recently read Virginia Woolf’s Orlando. No idea why: I love Woolf and read most of her work in high school and college, including some of the less-read stuff like The Years, but this one escaped me until a few weeks ago. It’s one of Woolf’s most sheerly enjoyable books, with all the lightness and invention of a love letter–the book was inspired by Woolf’s lover Vita Sackville-West. The novel is subtitled “a biography” and one of the most fascinating elements for me was how Woolf uses the biographer’s voice throughout, meditating on the conventions of how we narrate a life. Of course, there have been whole shelves of academic monographs devoted to the issues of gender and perception raised by the novel (in case you haven’t heard, the protagonist changes from a man to a woman midway through). None of them, I’m sure, as fun to read as Orlando itself, which I’m glad I read as a private citizen, not a student, with the same freedom that Woolf wrote it. 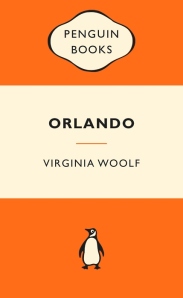 There is a wonderful aside in Orlando about Orlando’s own reading life:

The taste for books was an early one. As a child he was sometimes found at midnight by a page still reading. They took his taper away, and he bred glow-worms to serve his purpose. They took the glow-worms away, and he almost burnt down the house with tinder. To put it in a nutshell, leaving the novelist to smooth out the crumpled silk and all its implications, he was a nobleman afflicted with a love of literature …. It was the fatal nature of this disease to substitute a phantom for reality, so that Orlando, to whom fortune had given every gift — plate, linen, houses, men-servants, carpets, beds in profusion — had only to open a book for the whole vast accumulation to turn to mist.

As a foot of snow fell on St. Louis yesterday, whiting out the world, and panes of ice formed on our rattled windows, I stayed inside, happily absorbed in the final pages of Donna Tartt’s The Goldfinch. The powerful symptoms of the “disease” that Orlando mentions are also, in a sense, what Tartt’s novel is about: the multiple ways in which great beauty–in this case a small but exquisite 17th century painting called “The Goldfinch”–can order, alter, lift, or even save our lives. I love how Fabritius’s painting appears like a half-unwrapped gift on the brilliant book cover: 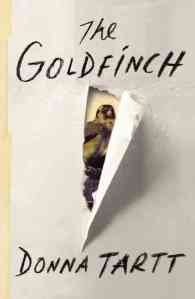 I didn’t exactly keep track, but I think I read the 770-page Goldfinch in less than a week. It’s the kind of thrilling, all-engrossing narrative world that will have you up late like a kid, burning through your tapers and breeding glow-worms, so to speak. In these early days of 2014, I’m feeling very grateful for gifts like these, offering glimmers of light (and a reason to get up) on these winter days that can be pretty cold and bleak. But sometimes a book, a lamp, a cat, and a couch are all you need to make the outside disappear.