What is organic gardening you ask? Simply put, it is gardening in an environmentally friendly way. That means without chemicals. Technically speaking, that also includes not having a field that borders another field where pesticides are in use.

Organic foods are now food widely found in most major grocery stores, besides the roadside vegetable stands. I recall in the seventies it was difficult to find organic foods in the grocery store. 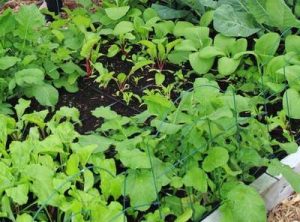 However, as technology developed and the vegetable customer became more knowledgeable, the demand increased.

The organic farming movement was born in the early twentieth century as a response to the agricultural ecologists that had a response with conventional agriculture. Organic food refers to crops or livestock that are grown on a farm without the application of synthetic fertilizers or pesticides, or genetically modified organisms. Organic foods still represent a small segment of the entire food industry.

Consumer demand for organically produced foods continues to provide U.S. farmers with double-digit growth. Nearly 20,000 natural foods stores in the United States sell organic products. That is nearly 3 out of every 4 grocery stores. According to a recent industry statistics, organic sales account for over 4 percent of total U.S. food sales, which is over 35 Billion.

The United States Department of Agriculture Agricultural Marketing Service implemented a National Organic Program in 2002 as a way to support organic farmers and processors, and to provide consumer assurance. They continue today to update rules on organic production and processing.