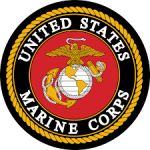 Whether you know them as Leathernecks, Jarheads or Devil Dogs, America is inherently proud of its Marines. The USMC, founded in 1775, is the United States’ expeditionary armed force, playing a major role as the first force on the ground in most conflicts. Today, approximately 180,000 Marines are stationed around the world at all times, ready to deploy quickly whenever and wherever they are needed.

The Eagle, Globe and Anchor is an emblem used to represent the Marine Corps:

November 10 marks the 242nd anniversary of the establishment of the Marine Corps. Center for the Reader is celebrating the USMC birthday by highlighting some USMC inspired military historical fiction. On the anniversary of its creation, compliments of The History Channel, explore seven surprising facts about one of the most storied branches of the armed forces.

W.E.B. Griffin's remarkable ten novel Corp Series follows the Marines from the devastating surprise attack on Pearl Harbor during World War II to the staggering losses suffered to secure the 38th Parallel in the Korean War.  This epic saga satisfies with vivid realism and adventure, rich characters and real heroes, and expert flair for the military heart and mind.

In two separate tales of the brutal Korean War, author James Brady alternately chronicles the dramatic First Hundred Days that culminates with a bloody assault to liberate Seoul in The Marine, and the disastrous Chosin Reservoir campaign and its desperate retreat in what has been called the greatest tactical withdrawal in modern warfare in The Marines of Autumn.

The Suicide Run, a compilation of five narratives by William Styron that draw from his personal experience in the Marine Corps during the 1950s, presents a complex picture of military life – “its hardships, deprecations, stupidities; its spirit, camaraderie, and seductive allure.”  In a more contemporary setting, The White Donkey is a graphic novel of Marine Maximillian Uriarte’s surreal journey to and from Iraq that is meant to help Iraq veterans struggling with the ramifications of their war experience.