From May 18 through 20, St. Louis will sponsor Tattoo the Lou convention where tattoo professionals, represented by local and international renowned artists, will demonstrate the myriad methods and eclectic styles of tattooing, in addition to seminars, competitions, interviews, and performances. So whether you want to be educated, entertained, or embellished, these opportunties promise an exciting weekend.

According to a 2015 Pew Research Center survey, 45 million Americans, 21% of the population, have at least one tattoo; what may be startling to some is that 47% of women under 35 are sporting ink! In the not-so-distant past, there was a stigma related to tattooed women: Tattoos were the mark of the slut, the delinquent, the freak; marked skin was sullied, offensive, and wanton. This blog, however, is not to debate why men’s tattoos are not equally viewed in terms of their sexual attractiveness or indicators of their availability, but to celebrate a woman who defied age-old stigmas and barriers to become the first known female tattoo artist in the United States and use her body as a canvas to showcase her talent. 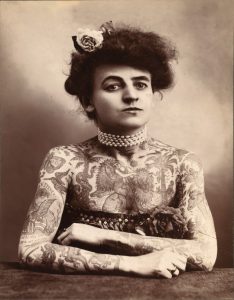 In 1904, circus tightrope walker Maud Stevens met Gus Wagner, “the most artistically marked-up man in America” at the World’s Fair in St. Louis. Rumor has it that Maud bartered tattooing lessons in exchange for a romantic date with Gus, which led to marriage several years later. Maud learned to give traditional hand-poked tattoos - despite the invention of the tattoo machine - and became a tattooist of others and herself. The couple, who continued working both as tattoo artists and “tattooed attractions” as they traveled the country, are credited for bringing tattoo culture inland from the coastal towns where it was rampant, thereby disseminating the art widely.

Center for the Reader dedicates this blog to all the painted ladies in our lives; we applaud the women who find the power of emblazoning their values, life events, and cherished artworks on their skin, and those creative and talented women blazing trails as innovative and tenacious tattoo artists, with this sampling of tattoo-inspired fiction. Maud Wagner, 1911. Photograph courtesy of Creative Commons

Under Her Skin : A darkly possessive relationship has left Uma alone and on the run. Beneath her drab clothing, she hides a terrible secret - proof of her abuse, tattooed onto her skin in a lurid reminder of everything she’s survived. Caught between a brutal past and an uncertain future, Uma’s reluctant to bare herself to anyone…much less a rough ex-con whose rage drives him in ways she will never understand. But beneath his frightening exterior, Ivan is gentle. Warm. Compassionate. And just as determined to heal Uma’s broken heart as he is to destroy the monster who left his mark scrawled across the delicate tapestry of her skin.

The Iron Hunt : By day, her tattoos are her armor. By night, they unwind from her body to take on forms of their own--demons of the flesh, turned into flesh. This is the only family demon hunter Maxine Kiss has ever known. It's the only way to live, and the very way she'll die. For one day her demons will abandon her for her daughter to assure their own survival - leaving Maxine helpless against her enemies. But such is the way of Earth's last protector - the only one standing between humanity and the demons breaking out from behind the prison veil. It is a life lacking in love, reveling in death, until one moment, and one man, changes everything...

The Bar Code Tattoo : Individuality vs. Conformity
Identity vs. Access
Freedom vs. Control
The bar code tattoo. Everybody's getting it. It will make your life easier, they say. It will hook you in. It will become your identity. But what if you say no? What if you don't want to become a code? For Kayla, this one choice changes everything. She becomes an outcast in her high school. Dangerous things happen to her family. There's no option but to run...for her life.

The Tattooed Girl: Joshua Seigl, a celebrated but reclusive author, is forced for reasons of failing health to surrender his much-prized bachelor's independence. Advertising for an assistant, he unwittingly embarks upon the most dangerous adventure of his privileged life. Alma Busch, a sensuous, physically attractive young woman with bizarre tattoos covering much of her body, stirs in Seigl a complex of emotions: pity? desire? responsibility? guilt? Unaware of her painful past and her troubled personality, Seigl hires her as his assistant. As the novel alternates between Seigl's and Alma's points of view, the altruism of the one and the virulent anti-Semitism of the other, clash in a tragedy of thwarted erotic desire. With her masterful balance of dark suspense and surprising tenderness, Joyce Carol Oates probes the contemporary tragedy of ethnic hatred and challenges our accepted limits of desire. The Tattooed Girl may be her most controversial novel.

The Girl With the Dragon Tattoo : Murder mystery, family saga, love story, and financial intrigue combine into one satisfyingly complex and entertainingly atmospheric novel, the first in Stieg Larsson's thrilling Millenium series featuring Lisbeth Salander. Harriet Vanger, a scion of one of Sweden's wealthiest families disappeared over forty years ago. All these years later, her aged uncle continues to seek the truth. He hires Mikael Blomkvist, a crusading journalist recently trapped by a libel conviction, to investigate. He is aided by the pierced and tattooed punk prodigy Lisbeth Salander. Together they tap into a vein of unfathomable iniquity and astonishing corruption.