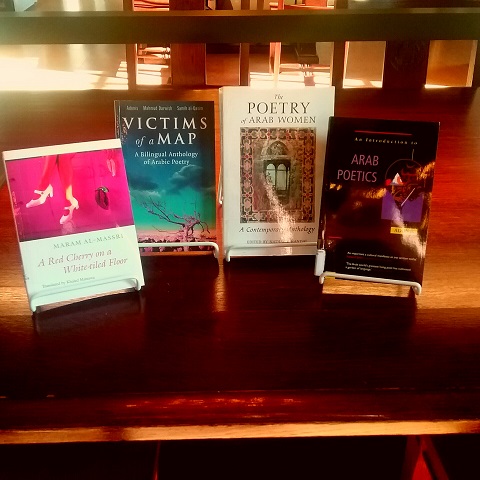 In response to the recent travel ban on seven Muslim-majority countries, a few institutions have compiled lists of literary works that have been written by refugees.  In a recent Book Review of the New York Times online, Gal Beckerman offers a thought-provoking perspective:

One way to regard the refugees in the news these frenzied past few days is as potential Americans, individuals and families escaping bad situations who imagine themselves building new lives here. What these particular refugees could become in this country, and how they could contribute to our society and culture, is a question stuck in suspended animation.

Book Riot also published a list of recommended books by people from each country that was included on the travel ban.  Inspired by these lists, we in Entertainment Literature and Biography decided to create a list of poets/poetry from each of the seven countries:

Ali Ahmad Said Esber, known by the pen name Adonis or Adunis, was born in the Al Qassabin village of Syria. The author of numerous collections of poetry, he has won several awards for his poetry including the Norwegian Academy for Literature and Freedom of Expression’s Bjørnson Prize, the Highest Award of the International Poem Biennial in Brussels, and the Syria-Lebanon Best Poet Award.

Fatima Mahmoud, born in Triopoli, Libya, is Libyan poet who, after working as a journalist in Libya, moved to Cyprus started a magazine focused on women's issues entitled Shahrazad Al-Jadeeda.  In her poem, What Was Not Conceivable she writes:

The fence is the noose of geography
around the waist of drowsy grass.
And time... wilts.

Her poetry can be found in Poems for the Millennium, Volume 4.

The Yemeni poet, Amin al-Mashreqi, has used poetry to fight the teachings of Al Qaeda. He states, "Through my poetry I can convince people of the need for peace who would never be convinced by laws or by force." You can read more about the practice of poetry in Yemen here:

Peaks of Yemen I Summon

Born in Omdurman, Sudan, Al-Saddiq Al-Raddi is one of the leading contemporary African poets writing in Arabic. He is the author of the book, A Monkey at the Window: Selected Poems.

There's a saying in Iran-- there are two books in every home, the Quran and Hafez. Only one of them is read. Hafez was born around 1300 CE in Shiraz, Persia (Iran) and even today, his poetry can be found in many Iranian homes.

If you Google "Somalia poetry," you'll find Somalia referred to as a "nation of poets" more than once. Abdulkadir Hersi, also known as Yam Yam, wrote poetry that reflected his distaste for the misuse of power and public funds of the Somalian regime during the 1970s and 1980s. Find more Somali poetry in this anthology:

An Anthology of Somali Poetry

Fadhil al-Azzawi was born in Kirkuk, Iraq. As a child one day, al-Azzawi visited the American Cultural Center in Kirkuk to borrow English language books. Initially denying him a library card because he hadn't reached the required age of 12, he asked them to test his command of the English language and passed muster. He began reading Saroyan, Frost, Faulkner, Steinbeck, and Cadwell. His interest in poetry led him to publish several books of poetry. Below is his poem, Spare Time, which can be found in the book of poetry, Fifteen Iraqi Poets.

During long, boring hours of free time
I sit and play with a globe.
I form countries without police or prisons
and throw out others that lack consumer interest.
I make roaring rivers flow through barren deserts
and form continents and oceans
that I store away for the unknown future.
I draw a new colorful map of nations:
I roll Germany into the Pacific Ocean, teeming with whales,
and I let refugees sail
pirate ships to her coasts in the fog,
dreaming of the promised garden in Bavaria.
I switch England with Afghanistan
so the young Brits can smoke hashish for free
courtesy of Her Majesty's government.
I smuggle Kuwait from its fenced and mined borders
to Comoros, the islands
of the moon in its eclipse,
keeping the oil fields in tact, of course.
I move Baghdad
into the loud drumming
of Tahiti.
I let Saudi Arabia crouch in its eternal desert
to preserve the purity of her thoroughbred camels.
I accomplish all this before
surrendering America back to the Indians
just to give history
the justice it has lacked for so long.
I know changing the world isn't easy
but it's still necessary despite everything.

Poetry can be found in the Entertainment, Literature, and Biography room at Central Library within the 800s of Dewey Decimal System. When in doubt, ask a librarian!